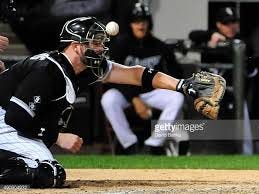 Both players were arbitration-eligible.

Flowers, 29, hit .239 with nine homers and 39 RBIs in 112 games in 2015. The White Sox not tendering Flowers was somewhat of a surprise, though they recently signed catcher Alex Avila, who’ll be expected to take a leading role behind the plate.

Shocked. Right now you are undoubtedly muttering to yourself, “WSD, you lard ass, why in the fuck are you blogging about the shitty White Sox and their shitty catcher?!? NO ONE GIVES A FUCK!!!”

Totally fair, actually. Literally no one outside of Sox fans gives two shits about this. But let me be clear – this is the very definition of “Christmas coming early” for White Sox fans. We hate a lot of things about the state of the organization right now, but having to watch Tyler Flowers every single day may very well top that list.  Trust me, this is actually blog worthy, just for all the wrong reasons.

Sucks to say it, because the Sox should have called it quits on the Tyler Flowers experiment like uhhh at least 2 years ago, but I was fully expecting to have to endure the .220/.280 pass ball machine that is Tyler Flowers for yet another year. But, for whatever reason, the Sox declined to tender him a contract and I couldn’t be happier.*

The only question now is what next? The Sox can’t POSSIBLY be gambling on Alex Avila to return to his 2011-12 or so form can they? I have no clue. Maybe it’s Avila, maybe it’s Brantly, maybe Kevan Smith. If it’s one of those three, the Sox are still left with HUGE question marks behind the plate.

Hopefully this is the first move Hahn makes this winter that leads to the acquisition of a better backstop.  A little carriage before the horse action. It HAS to be, cuz if its not, they’re no better today than they were yesterday. I just have no idea who it’ll be (if anyone) or how he’ll do it.  As of now, because of all the negativity I’ve built up about the team over the last year, I’ll assume it’s probably just the dumping of a bad player, prepare for the worst, and hope for the best.  But this is the season of perpetual hope or however that saying goes, right?

*In all honesty, apparently Sale loves throwing to Flowers. If the Sox went into 2016 with him catching Sale every fifth day, fine. No different than Lester/Ross. But there was no way we as fans could stomach him catching 120 games another year.  And do NOT give me that “he’s a good pitch framer!!!” shit.  Do. Not. Care.