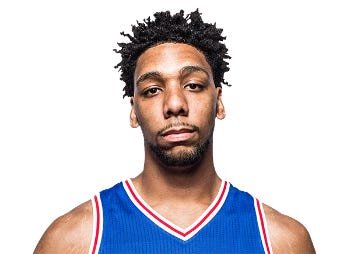 ESPN – Jahlil Okafor has been suspended two games effective immediately, the Philadelphia 76ers announced Wednesday. “Jahlil is a very important part of our organization and our future. While we are disappointed with his recent actions, we have faith in him as a valued member of the Sixers,” the team said in a statement. “We will provide the necessary resources to support him on his journey and will do our part to help him succeed both on and off the court.” Okafor will miss Wednesday night’s game against the New York Knicks and Saturday’s game against the Denver Nuggets.

Veteran move by the Sixers. Win a game, avoid (more) embarrassment by avoiding the worst start in NBA history, immediately suspend their best player to go right back to the tank. Yeah, Okafor needed a kick in the dick delivered in some form and hopefully this is enough. He’s two weeks away from his 20th birthday. Let’s try to avoid jail time by then, please.

Time to cue the music, again, because you’re not gonna hear it after a Sixers game till maybe 2016. And that’s a big maybe.