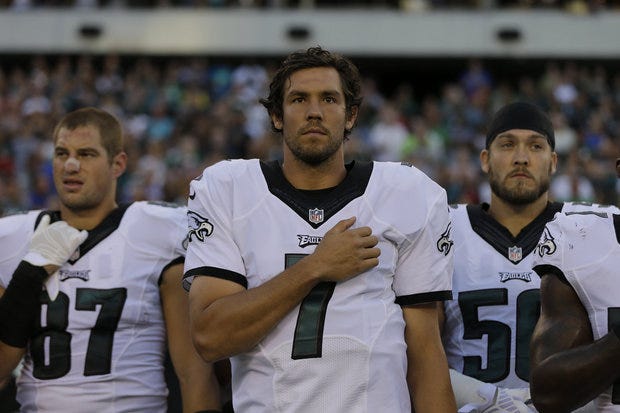 PHILADELPHIA — Sam Bradford said Wednesday that “barring any setbacks,” he expects to play when the Eagles visit the New England Patriots on Sunday. Bradford missed the Eagles’ last two games after being injured in the 20-19 loss to the Miami Dolphins. Bradford left the Miami game with a concussion and a separated left shoulder. He was cleared through the NFL concussion protocol, but he was held out of last week’s game in Detroit because of the shoulder. Bradford practiced with the Eagles both Tuesday and Wednesday. “I feel much better than I did at this point last week,” Bradford said. “I’m much more comfortable out there with what I’ve been able to do on the field. It’s starting to feel good.”

Annndddd myself and most fans in the Philadelphia area react accordingly:

All this means is a different lamb is going to be sacrificed in this slaughter. Yes, Sam Bradford does give the Eagles a better chance to win. Yes, I am happy(?) he’s going to be playing again. No, the Eagles still don’t have a snowball’s chance in hell in winning this game on Sunday. The problems on this team go well beyond the QB position. Sam Bradford will be better than what was out there the past 2.5 games, but God himself could come down from the rafters and the Eagles will still fall to the Patriots. Even though that’s physically impossible because apparently The Almighty has already been playing under center for the Pats for the past 15 years or so. Combine that with Portoy’s deal with the devil and the Birds will be lucky to get out of Foxboro alive.