“Steak is for fucking tax payers.” Put that quote on a stamp and mail it to the heavens.

It’s easier to get mad at and confront the scum at the bottom of the puddle instead of the billion dollar companies in America that use loopholes to circumvent paying millions they rightfully owe, but to each their own. You win your battles when you can. These people are worthless and should be called out for taking advantage of the system. The man is 100% correct when he yells, “Pregnant, smoking and pajama pants? You’re like a fucking triple-fuck-up” to the thing loading its car. These people shouldn’t have the right both vote or breed. If anything you gotta give major props for the American having the guts to exit his vehicle after seeing Oddjob in the Orioles jacket being eerily quiet in the background. 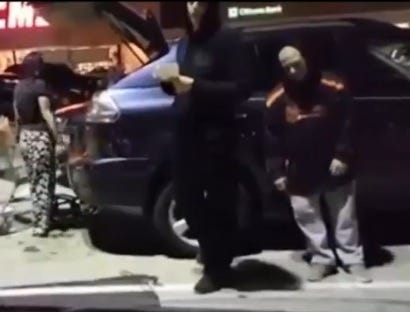 I was just waiting for him to snap and to go apeshit. If it wasn’t for the heroin high that little guy would’ve had that American’s nuts for dinner.