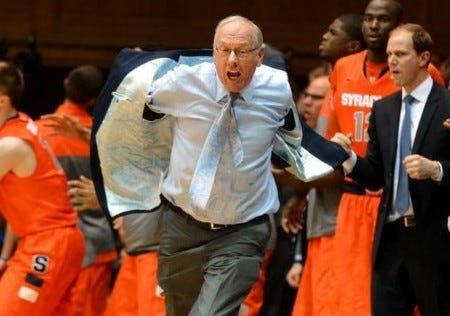 We’re onto day 2 of the ACC/Big 10 Challenge.  Day 1 was pretty damn impressive. First off, for anyone who tailed my picks we went 4-2, which means we won money and therefore can go to the finest all you can eat buffet around.

Second off, we saw a helluva yet flawed game in UNC/Maryland. The first half was ugly for Maryland, but North Carolina did the absolute smartest thing it could have done defensively. The Tar Heels ran double teams and traps at Melo Trimble right off the bat, which resulted in Trimble looking flat out awful. He constantly turned the ball over and couldn’t get anything going. Offensively the Tar Heels got pretty much whatever they wanted and I’ll admit I was impressed by Marcus Paige in his first game back.

The second half was highly entertaining for the first 10 minutes as there was simply no defense. Trimble caught fire from deep and North Carolina ran whatever it wanted to offensively. Ultimately though, Diamond Stone and Jake Layman were worthless while Paige and Brice Johnson were too much. I still think Maryland will be a better team come March, but for now North Carolina proved it’s a top-5 team.

On to tonight. Follow me @barstoolreags for all your college hoops nonsense.

We finally get what everyone across the country has wanted. Louisville is playing a team that is worth a damn. Up until today the Cardinals pretty much played high school JV teams while Pitino clamored for a top-25 ranking. Well, he got it from the AP and now gets to go to East Lansing to play Denzel Valentine, who is off to the best start in the country. State has a ton going for it right now outside of Valentine. Bryn Forbes can shoot the shit out of the ball, while Deyonta Davis and Matt Costello are crashing the boards. Damion Lee can’t win the game by himself for Louisville, especially on the road. I’m not sold on Louisville at all.

Syracuse is coming off a helluva Thanksgiving week winning the Battle 4 Atlantis. The biggest question here is do the Orange have a letdown similar to Miami after winning Puerto Rico Tip Off? I don’t see it happening simply because Wisconsin doesn’t have enough depth to compete with Syracuse, especially with no outside shooting against the 2-3 zone. Tyler Lydon has been a Goddamn blessing for Syracuse as he is putting up 11.5 points and 8.7 rebounds per game as a freshman, while shooting 58 percent from deep. Wisconsin’s defense has been a mess again this year (86th on KenPom) and I expect the Orange to take advantage of their balanced scoring. It’s hard to imagine Wisconsin going on the road and getting a win here. HOWEVAH, weird things happen.

Gross. This game doesn’t deserve 100 words. If you watch this/gamble on this you are also a true degenerate.

Pick: Boston College, only because it’s at home

A desperate Indiana team heading to Cameron Indoor against a Duke team that is on a roll again? Yeah, Tom Crean stands no chance. This guy is one of the worst in-game coaches I’ve seen in a long, long time. There is literally no defense being played by the Hoosiers, which means Grayson Allen could go for 40 tonight. There’s not a lot of great matchups for Indiana because James Blackmon Jr., doesn’t play a lick of defense and will have to guard Allen or Matt Jones (who is shooting 48 percent from deep, so good luck with that). Brandon Ingram/Troy Williams should be a fantastic matchup as they both are the best NBA prospects on each team. If Luke Kennard plays like he did against Utah State (i.e. make a fucking shot) then Indiana has no shot. I can’t trust Crean on the road after what I’ve seen this year.

Another game where both teams need to win. Notre Dame is coming off a 1-2 week with losses to Monmouth and Alabama by a combined three points, while Illinois is 3-4 on the year with a loss to North Florida and Chattanooga. Not great, Bob. I’m bullish on Notre Dame because of Demetrius Jackson and the fact I think he can mimic what Jerian Grant did a year ago. He’s already averaging 18 points and over 4 rebounds and assists per game. Zach Auguste is quietly averaging a double-double for the Irish and those two should have a big game. On top of that Illinois just lost Mike Thorne, a transfer from Charlotte, for the season who was averaging 13 and eight. It’s a shame for head coach John Groce, who is a great coach but his best players get hurt each year.

This is the most intriguing game of the night for me because both teams I had as sleepers before the season started. Florida State suffered a loss to Hofstra but the weirdest part so far is Xavier Rathan-Mayes has struggled this year. He’s only averaging 10 points and shooting 11 percent from deep. Florida State needs to get him going in order to win games. On the flip side their two freshmen have been unbelievable, averaging over 20 points each. Iowa has either blown teams out or lost. There’s no in between. Jarrod Utohff is playing like an All-Big 10 player, putting up 18 points per game. I think this game is one possession most of the time, but Rathan-Mayes can finally get going.

Outside of the ACC/Big 10 Challenge there are some great games on tonight. Keep an eye on Butler/Cincinnati, Gonzaga/Washington State and BYU/Utah.