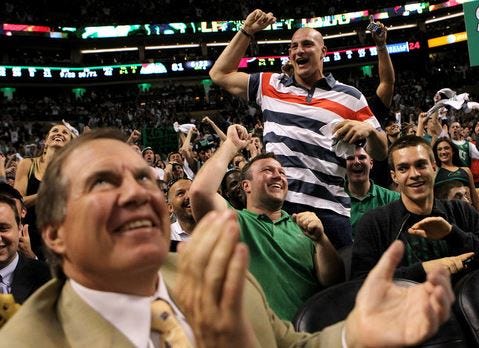 The New England Patriots and the Gronkowski family have released a statement regarding Rob Gronkowski’s injured right knee.

“During Sunday night’s game, Rob Gronkwoski sustained a bone bruise/sprain of his right knee. His status will be evaluated on a week-to-week basis and listed accordingly on the practice participation and injury reports. There is no timetable for his readiness to return, which will be determined in the days or hours prior to the appropriate game. Any timetable reported prior to that final determination would be speculative.”

Just had to chime on this joint Patriots/Gronk Family press release from earlier this afternoon. Weirdest thing I’ve ever seen. Obviously this is being driven by the Gronk camp. Obviously the Pats would rather say nothing since they never comment about any injuries. I mean we still don’t even know what the hell happened to Jaimie Collins and now we’re suddenly releasing joint family/team statements? So strange. I’m sure this has something to do with his last injury debacle, but there doesn’t seem like a need for this.  Both the Pats and Gronks should be on the exact same page. He’s not playing again till he’s 1,000 percent healthy and if that’s not until the playoffs so be it. And even if the family wanted the Pats to issue this press release why did they insist their names were on it? Just feels like Drew Rosenhaus has his paws all over this or something.  It just feels off. I didn’t like it when I heard about it. I didn’t like it when I read it. I can’t put my finger on it, but I know I don’t like it.  It raised a red flag when I don’t think there are any red flags to raise?