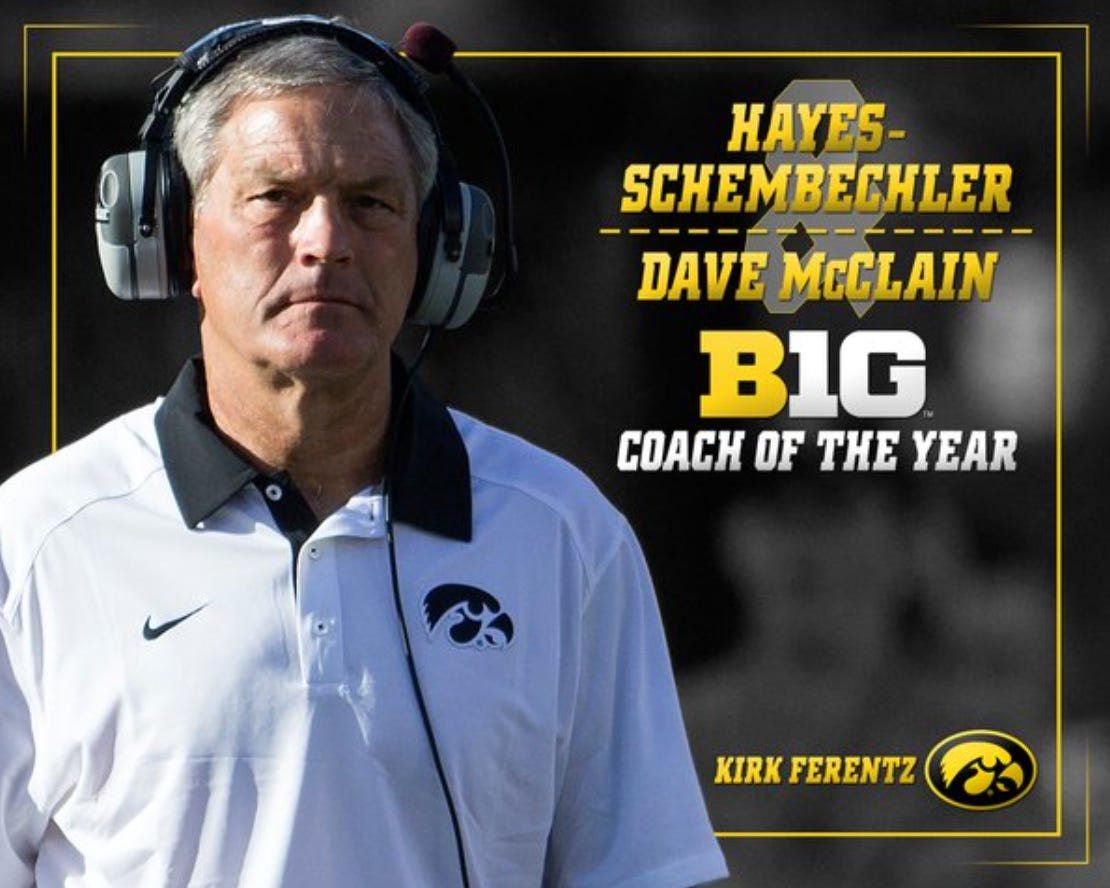 And the accolades keep rolling in for the Hawkeyes! Undefeated season, a trip to the B1G Championship Game, Desmond King won B1G defensive back of the year and now Kirk Ferentz wins B1G Coach of the Year for the fourth time. Fourth time!  That’s pretty incredible. Ferentz has gotten shit on a lot the last couple of years, and rightfully so at times, but we’re gonna look back when his tenure is over and he’ll easily be one of the all-time greats around here. Especially given how this season could end up.  The other years he won were 2002, 2004, 2009 and now. This is by far the most out-of-left-field COTY award for Ferentz. Nobody predicted this and if they said they did they’re lying. This was supposed to be another 7-5 or 8-4 team that has now aligned itself with a potential playoff bid. I mean the basketball team lost a game before the football team for christs sake. That’s wild. Ironically, Ferentz’s handling of the Jake Rudock/CJ Beathard situation during the offseason was his stroke of genius. I say ironic because last season he fumble fucked his way through picking a starting QB. We didn’t know who the starter was in the bowl game against Tennessee.  But once he shipped Rudock off to Harbaugh Land and named Beathard his starter, it’s been gravy ever since. 12-0, B1G west title and now COTY.  Let’s keep it rolling.

By the way, can we just get to Indianapolis already? I’m not enjoy this whole weekday thing when the Hawks are about to play their biggest game ever. I can’t focus on anything else. I’m going to the game and I’m ready. ESPN had the Playoff Rankings show last night and it was a snoozefest.  Nothing changed from the week before so it was pointless. I’m ready for #IowaInvadesIndy.  I’m estimating that it’ll be 90/10 split in the crowd at Lucas Oil in Iowa’s favor on Saturday. Go Hawks.