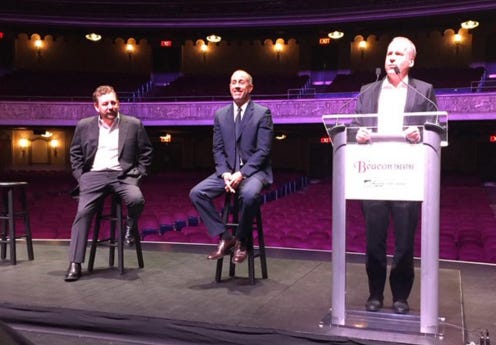 Gothamist – Jerry Seinfeld will have a residency at the Beacon Theatre starting next year, according to Tweets emanating from a press conference happening at the venue right now. The showswill be January 7th, February 18th, March 2nd, April 14th, May 5th, and June 8th. The venue is operated by The Madison Square Garden Company, and members of that team joined Seinfeld for the announcement this morning. The the Beacon Theatre has now sent out more information. The show will be called “Jerry Seinfeld: The Homestand,” and tickets go on sale Tuesday, December 8th, at 11 a.m. Prices have not been announced yet. “My favorite theater in New York to perform in has always been The Beacon. Comedians live for certain houses that just feel ‘alive’ for some reason,” Seinfeld said at the press conference, “The Beacon is that place for me and I am so excited to make it my new home.”

I cant even begin to think about how expensive these tickets will be. He did a couple shows a year or two ago that sold out instantaneously and these will be the same. No matter who many shows he lists or ends of adding. The secondary market prices for this are gonna be through the roof.

And I still might think about pulling the trigger. There are certain shows that are worth it and I think getting to see Seinfeld on his home turf is one of them. I mean think about it – its not just going to see a stand up routine. Its going to see a dude who’s almost a billionaire. The most successful stand up comic and TV star of all time. The funniest (almost) billionaire alive. That is truly a one of a kind show. Especially on his home turf at the venue he calls his favorite. Theres something about getting to see a dude on his home court where hes in his element. Its a bucket list thing a lot of people are going to want to check off. I think that March 2nd show is the sweet spot. When hes really hit his stride with this routine but it hasnt become repetitive and stale yet. Happy 31st birthday to KFC. I know where I’ll be.

Whats absolutely unbelievable is that picture with the dumb little fucking Ewok idiot James Dolan. I exagerrate a lot but the fact that James Dolan is one of the most successful people on the planet is INFURIATING. Owns the Knicks and the Rangers and controls the most famous arena on earth. At the helm of one of the biggest cable providers in one of the biggest cities in the world. Standing up there with Jerry Seinfeld as he announces residency at Dolan’s house. The guy can snap his fucking fingers and play a kazoo with his fake band opening for the goddam Eagles. Utterly preposterous this dude has as much success and power as he does. Arguably the most successful idiot on earth.