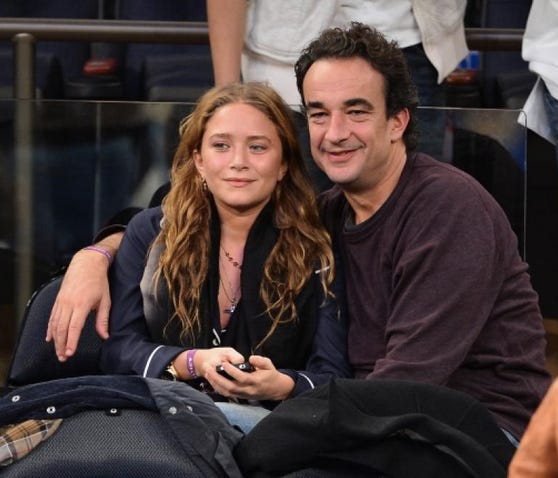 (Source) – It’s a May-December marriage for Mary-Kate Olsen. The 29-year-old former child actress tied the knot with her French banker beau of three years, Olivier Sarkozy, 46, at an intimate Manhattan ceremony on Friday night, a source said. The reception was held at a private residence on 49th Street, between Second and Third avenues; cocktails were served in a rear garden before the 50 guests dined indoors. Attendees were required to turn in their cellphones beforehand. Party decor consisted of “bowls and bowls filled with cigarettes, and everyone smoked the whole night,” the source said.

What a dream this must have been! Nothing romanticizes the nuptials of what appears to be a couple that was founded on Stockholm syndrome like a couple of fish bowls of Marlboro reds, right? Oh the child bride marrying an old Frenchie doesn’t hurt your heart enough? Here, grab some sticks. We don’t have an open bar but we can all just huddle in a circle and smoke, high school style, like we’re badasses until the break of dawn.

It’s not really that surprising of a move, though. Wedding always seem to have the theme of the couple, don’t they. Like the last two weddings I went to in Newport and both had little touches of sailing, or the beach. Beautiful ceremonies. But what are you to expect from an French dude and a hipster child star? What’s their common ground? It’s cigarettes. The theme of this wedding was cigarettes and death, and I can’t imagine anything more perfect for these two.