After a little more than a year of being the Knicks blogger, I was finally able to catch a Westchester Knicks game. The schedule at my old job wasn’t really conducive to hitting a game, but now that I am full-time Barstool, I felt it was my duty to bring you highlights of Jimmer’s first game as a Knick.   Was Floyd Mayweather there to see his old buddy and fellow TMT member Jordon Crawford play?  Maybe.  Or maybe he had heard how hot of a ticket it was to see Jimmer’s Knicks debut and flew in from Vegas to take in the game.  You make the call, because I certainly can’t.

So coming straight from the bright lights of the Bronx River Parkway at the arena that baseball card shows and high school basketball tourneys built, the Westchester Knicks host the Grand Rapids Drive at the Westchester County Center!

I walked in just in time to see Jimmer score the first points of the game, which also doubled as his first (of many, many) points as a Knick. Jimmermania finished with 37 points and 8 assists on the night, not too shabby.

And no, I don’t have a clue how to get past those velvet ropes in order to get a seat at that table. I imagine it requires being an A+ list celebrity or promising to advertise for like five seconds at one of the home games.

The D-League may be the minor leagues for basketball, but the vendors are nothing but pros here. Dancing on a hoverboard near a booth advertising wind power with a cornhole board to lure you over? I Love This Game.

Black Irish was in the house, which was great news since every Knicks fan with a brain has Kyle O’Quinn locked in as their current second favorite player on the Knicks.  Just legendary athletes everywhere you looked last night in White Plains. 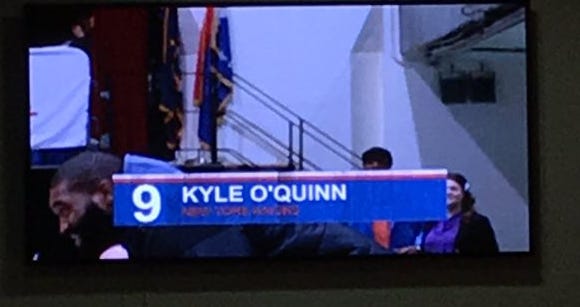 A pretty big crowd gathered around Floyd at halftime after word had spread that he was there.  I guess these people didn’t realize that Barstool’s newest full-time blogger was upstairs watching the whole thing; ready to shake hands, sign autographs and kiss babies. 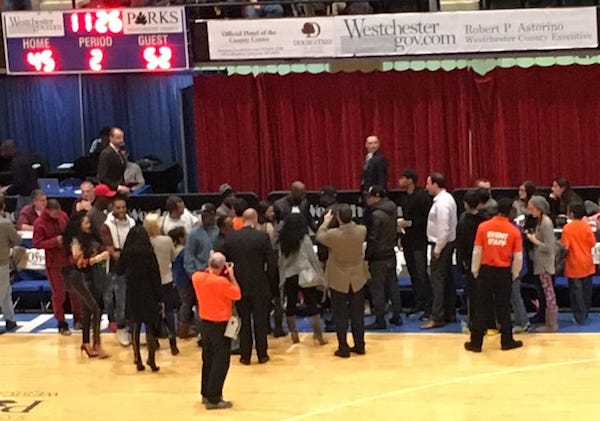 Dance Cam was about a 7/10.  Honestly was pretty happy to see that the DX crotch chop is still a thing that the youth of America does. There is still nothing better than telling grown ups to suck your dick.

This guy had a chance for free Buffalo Wild Wings for a year (or maybe for life?). Pretty sure he’s a righty but just doesn’t know it yet. Also, A+ camerawork from me on this one.

I was already having the time of my life before this appeared on the video screen. One minute you and Money Mayweather are watching Jimmer fill the bucket . The next minute you find out that you may be getting free wings just for coming out to the game.  God bless America.

I am not going to lie, some turnovers and fouls caused things to get a little hairy.  But a couple of Travis Trice free throws ended up icing the free wings with less than 20 seconds left. Dozens of people cheered. It was electric.

In all honesty, it was a pretty fun game to go to. The basketball was solid, with a bunch of players that were really good in college. Jimmer. Cleanthony Early. Devin Ebanks. Travis Trice. Good stuff. Also, shoutout to the diehard season ticket holders that were starting defense chants in the first quarter of a D-League game. That’s passion I will never have or understand. And shoutout to Stoolies Jason and John for saying hello and also telling me that Floyd Mayweather was in the house before anyone on Twitter had announced it.

The Westchester Knicks are 6-0. The hottest team in basketball this side of the Golden State Warriors.  Can’t wait for two basketball championships to arrive in New York this summer.  Three if the Liberty are good again and Isiah doesn’t fuck shit up.  That’s why my new Westchester Knicks magnet gets the prime real estate on my fridge. 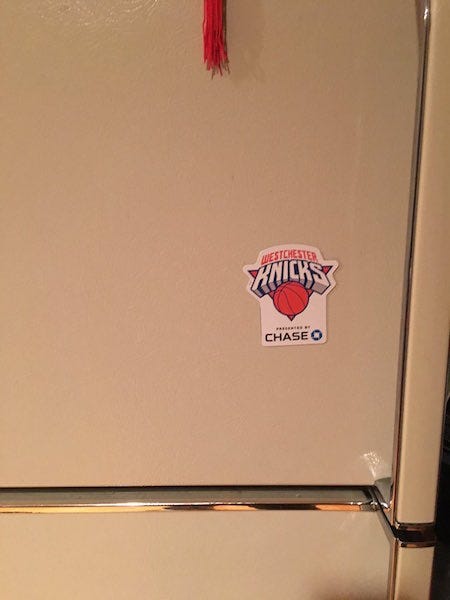