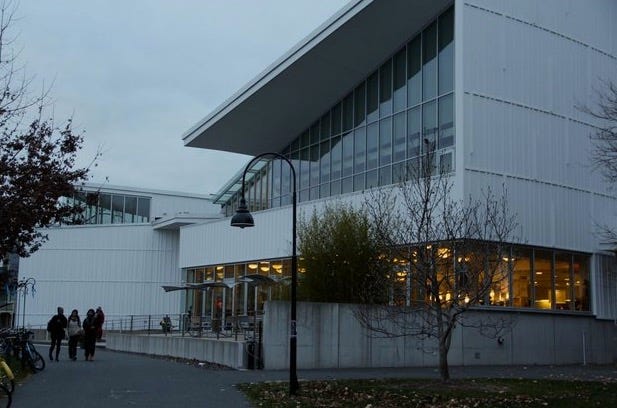 NORTHAMPTON – In an effort to create a safe space free from potential insensitivity from the news media, activists at Smith College barred reporters from covering a sit-in Wednesday that drew 300 to 500 students.

The demonstration, organized in solidarity with students at the University of Missouri, was held from from noon to 12 a.m. Thursday in the Smith College Student Center.

The activists’ goal was to establish a place where students — prioritizing students of color and black students — could share their thoughts, feelings, poems and songs related to a rash of racially charged episodes this fall at Mizzou, as well as personal experiences of racism.

An event that draws so many people, especially one that concerns a topic of magnitude such as civil rights, is customarily covered by media outlets. But reporters who arrived at the sit-in were met with a clear message: Keep out.

Alyssa Mata-Flores, a 21-year-old Smith College senior and one of the sit-in’s organizers, explained that the rule was born from “the way that media has historically painted radical black movements as violent and aggressive.”

“We are asking that any journalists or press that cover our story participate and articulate their solidarity with black students and students of color,” she told MassLive in the Student Center Wednesday. “By taking a neutral stance, journalists and media are being complacent in our fight.”

Smith organizers said journalists were welcome to cover the event if they agreed to explicitly state they supported the movement in their articles.

Schmeidel said that as far as she’s aware, the sit-in was the first Smith event of its size to bar media coverage.

I tried. I tried really hard to be done with all this. Despite the steady flood of emails and tweets I’ve gotten all day every day for the past week from every campus from coast to coast, I’ve skipped over all of them and dedicated myself to go back to the normal, happy stuff – college football, hot girls, viral videos. The Missouri stuff was a major story and the jump off point for this entire thing, but after that died down it was time to move on.

But this one was just too much. Smith College forced my hand. Banning all media from covering a protest unless they issue a statement of 100% unconditional support. Having security in place to physically remove any journalists trying to report the story. Yes they’re a private campus that absolutely has the right to do that. And they’re also a college campus, which I’ve always been led to believe, up until just recently, was a place where debates and intelligent discussions and various opinions are meant to be shared open and honestly. That is definitely not the case anymore.

What we need is an adult, a real adult in a position of authority to step in and let them know this isn’t how it works. That you can’t just ban and censor and silence all opinions that are not your own.

“It’s a student event, and we respect their right to do that, although it poses problems for the traditional media,” Shmeidel said.

Schmeidel went on to say that the college reserves the right to remove reporters from the Student Center because it’s a private campus.

Well alright then. Enjoy the next 4 years in your happy bubble, because the real world is going to be a real shitty wake up call.