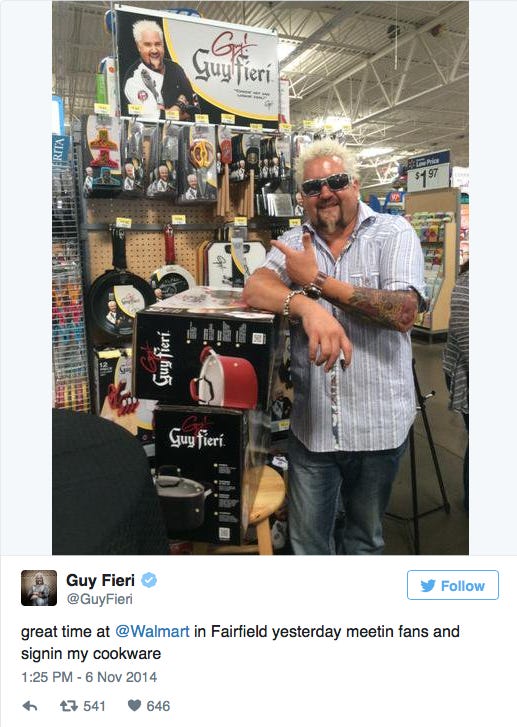 (Source) Anthony Bourdain has been slamming celebrity chefs since the earliest pages of his 2000 book “Kitchen Confidential.” The vocal snob regularly took swipes at the peppy TV cooks on his own popular Travel Channel program “No Reservations” and still makes the occasional Giada crack on his CNN show “Parts Unknown.” It’s his thing. Forget Lisbon — let’s dish about Rachael Ray!

Considering Bourdain is also a sometime judge on “Top Chef,” you’d be forgiven for thinking that all of the kvetching about his fellow TV food personalities is a touch hypocritical — yet he keeps on spewing.

In a recent GQ profile, frequently ridiculed “Diners, Drive-Ins and Dives” host Guy Fieri responded to jokes made at his expense during Bourdain’s interview with Atlanta magazine.

“So I sort of feel in a heartfelt way for Guy [Fieri]. I wonder about him,” Bourdain said. “He’s [47]-years-old and still rolling around in the flame outfit . . . What does he do? How does Guy Fieri de-douche?”

Fieri, proprietor of the maligned Guy’s American Kitchen, was none too pleased with Bourdain’s sadist pot-shots. “I don’t like him making fun of people, and I don’t like him talking s?-?-?t. And he’s never talked s?-?-?t to my face,” Fieri told GQ. “I know he’s definitely gotta have issues, ’cos the average person doesn’t behave that way. It’s not that I’m not open to the reality that the food world was like this from a few people’s perspective. It’s just, What are you doing? What is your instigation? You have nothing else to f?-?-?king worry about than if I have bleached hair or not? I mean, f?-?-?k.” Winner, winner, chicken dinner!

Want to know who I hate the most in this world? Snobs. People that think they’re better than you just because they read a few books or traveled the world. Anthony Bourdain is a snob, plain and simple. So yeah, Guy Fieri still frosts his tips, and yes he wears garish clothing and outrageous sunglasses, but you know what he doesn’t do? Judge people. He’s a dude who just likes to eat some good food, grunt and groan on camera, and drive around in a convertible with the top down. Sorry not everyone can be a 5 star chef, Anthony. You can say a lot of things about Guy Fieri but don’t say he’s not a man of the people. Hey Anthony, I know you’ve been to Malaysia and India and Timbuktu, but have you ever been to Flavortown, USA? I didn’t think so, loser. Talk shit to me or Guy’s face, dare you.

This quote hurts because it’s kind of true, but fuck Anthony Bourdain still.

“If Ed Hardy fucked a juggalo”