Considering the AFC is a cesspool of mediocre teams, thinking the New York Jets had a solid chance at the playoffs after a 4-1 start didn’t seem crazy. Unfortunately, they are now floating right in the middle of that cesspool at 5-4 after refusing to win a game the Buffalo Bills repeatedly handed to them. Here is a brief mid-season rant on the state of the team… 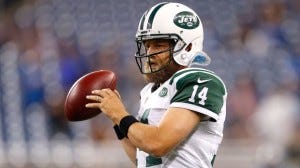 After a fourth quarter meltdown in New England, a slaughtering at the hands of Oakland, a  one possession win over Jacksonville and an inexcusable loss to Buffalo, the Jets aren’t a good team. Fortunately, outside of New England, who is a good team in the AFC? Cincinnati just went full Dalton against the Texans. Denver was destroyed by the 3-5 Chiefs and is starting Brock Osweiler at quarterback. The AFC South doesn’t have a team over .500. The Bills just won their Super Bowl in week 10 and are still only 5-4 with the Patriots on deck. Oakland lost two games in a row. The Chiefs are coached by the Kool-Aid Man and their quarterback can’t throw over 10 yards.

As for the Jets? Their quarterback isn’t nearly as good as most of the fan-base wants to believe and was flat out awful against Buffalo. However, with the rate of quarterback play in the NFL this season, he has generally been competent enough to keep this team in playoff contention if he can protect the football. Around the offense, the Jets need the following:

Defensively, the Jets actually got back on track against Buffalo to an extent but they are going to need the following:

The special teams have been awful. At this point, the team should make Cromartie a part time defensive player and the full time kick returner along with pray that Randy Bullock can be the kicker he was last season. Maybe one day Jeremy Kerley will not fair catch a punt and take it back longer than 3 yards…baby steps, though.

A few requests for Jets fans before these final 7 games hit:

The Jets now face angry face Bill Belichick wanna be Bill O’Brien and the 4-5 Houston Texans on the road, with either Brian Hoyer (the poor man’s Matt Cassel) or TJ Yates (the poor man’s Ryan Fitzpatrick) under center. After that, they are basically home for a month with games versus Miami, “at” the Giants and versus Tennessee. I’m aware this team was 4-12 last year and is “rebuilding” to an extent but with that schedule? You better be playing for a playoff spot in week 16 and week 17.