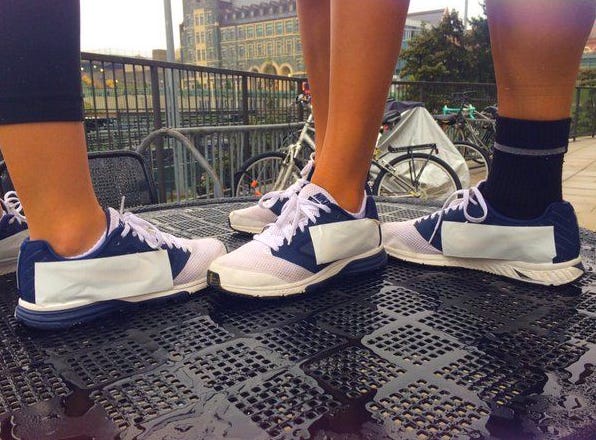 First of all, please bow your head and say a prayer of KMarko, as this might actually make his head explode.

Georgetown - A group of unidentified Georgetown student-athletes have taped over the Nike logo on parts of their university-provided equipment in response to an event led by activist Jim Keady that explored Nike’s labor practices.

A tweet from Keady shows a picture of three student-athletes with tape covering the Nike logo on their shoes. Keady, who spoke at Georgetown on Nov. 9, called into question the relationship that Georgetown and other Jesuit institutions have with Nike.

“It’s exciting that students are taking up the call,” Keady said regarding the photo in an interview with theVoice. “Students have a lot to lose in taking a stand like this.”

In Keady’s discussion with students on Nov. 9, he claimed that Nike employees in sweatshops make only $1.25 per day. Keady described working and living conditions in these factories as cramped and dirty. He also noted physical, verbal, and and sexual abuses that some workers, especially female, endure as well as low health and safety standards being met in the factories.

“There are student athletes here at Georgetown, and every time they go out onto the field or the court they are wearing the Nike swoosh or Jumpman logo that was launched here at Georgetown with St. John’s and one other school,” Keady said at the event. “Georgetown was used, and the administration and elected parties used the student athletes and continue to do so. They have turned [student athletes]into walking billboards for a company that violates everything this Catholic Jesuit institution stands for.”

Oh wait, no? They just put pieces of tapes over the swoosh and tweeted a picture? Get the FUCK out. I have never seen a more pussy, half-assed, holier than thou while not really giving a fuck protest in my life. Still wearing the free Nikes while trying to pretend you give a fuck about Nike’s labor practices is so laughable. “Some guy told us we should hate Nike…but mannnnnnn these Jumpman’s are cozy!”

How do these kids think they even have scholarship money to begin with? And the free equipment, facilities, tutors, and every other perk that comes with being an athlete at a D1 school? Is that money just growing on trees? No, dummies. They have no problem using the money of the company they despise sooo much. None at all.

These kids don’t care about Nike’s labor practices more than you or I. Every so often when you read about them you go “oh yea, I guess that does kinda suck”, before getting back to being American and not being some poor kid in some poor country with tiny little hands sewing up my shoes.

Hopefully this is the last idiotic “protest” we see for a while. College students have reached levels of absurdity never seen before. They all think they are so special, little gifts from god that will change the world. And I get it- I was once in college too. You take one sociology class and think you actually do matter and can make changes. Guess what- the world isn’t all college. It’s not a utopia where drinks are 2 dollars and girls are willing to have sex with you. You’re generally replaceable, mommy and daddy aren’t there to bail you out of every problem, and if you protest against the people paying your bills, they’ll find someone to do the job who isn’t a fucking asshole.