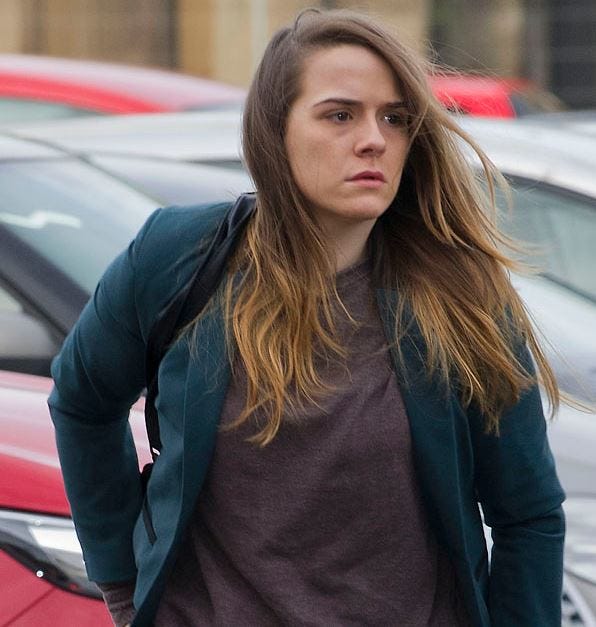 Dailyrecord – A woman who tricked her female friend into having sex by pretending to be a man for two years has been jailed for 8 years. Gayle Newland, 25, disguised her appearance and voice as she persuaded the other woman to put on a blindfold when they met up. The pair had sex about 10 times until the complainant ripped off her mask and in disbelief saw Newland wearing a prosthetic penis.

“Central to the case was your creation of an alta ego character named Kye. “You invented him when you were a young teenager and you used this created character to facilitate your deception. “You had created a Facebook entry in the name of Kye which included the most detailed information about this ‘man’, his family and friends, together with many dozens of photographs to back up the illusion.”In 2011 you contacted your fellow student X pretending to be Kye and there developed a regular exchange of texts between you.”Kye then arranged for X to meet a friend of his – that was you.

“This involved a complex story about Kye having suffered a disfiguring injury and him being embarrassed at being seen. “All the time you were successfully convincing X that Kye was a man. “Eventually Kye agreed to meet X but on strict terms to prevent your deception from being discovered. “They involved a blindfold for her and the wearing of bandages and a swimsuit to disguise your breasts and a hat to disguise the length of your hair.”

“At some stage you acquired a prosthetic strap on penis to allow you to penetrate her vagina which you did on up to ten occasions when you met at her flat in Chester. “You acquired the object for you to use on her and she was successfully deceived into believing this was full sexual intercourse with a man and nothing less.

“As time went on X decided that she was not happy with the relationship and told Kye. You as Kye threatened to kill yourself. “You made up a story of Kye’s mother having just died and needing to see her. “You met – under the usual bizarre terms but this time persuaded her to lick Kye’s penis which she did and she allowed you to perform oral sex upon her. “The acts culminated in X removing her mask and seeing you her best friend on the bed with her wearing the strap on penis pretending to be a male.

Ah a story as old as time itself. A modern day Romeo and Juliet if you will.. Girl meets girl. Girl creates fake facebook profile posing as a guy. Girl seduces her best friend. Girl prtending to be the boy claims she was disfigured in a horrible accident and will only meet if the girl wears a mask. Girl buys a fake penis and proceeds to fuck the shit out of her best friend pretending to be a boy. Girl pretending to be a boy demands to receive a blowjob with fake penis. The girl who thinks she’s sucking real dick becomes suspicious and takes off her mask only to see her best friends laying next to her with a strap on dick. Stop me when you’ve heard it all before…