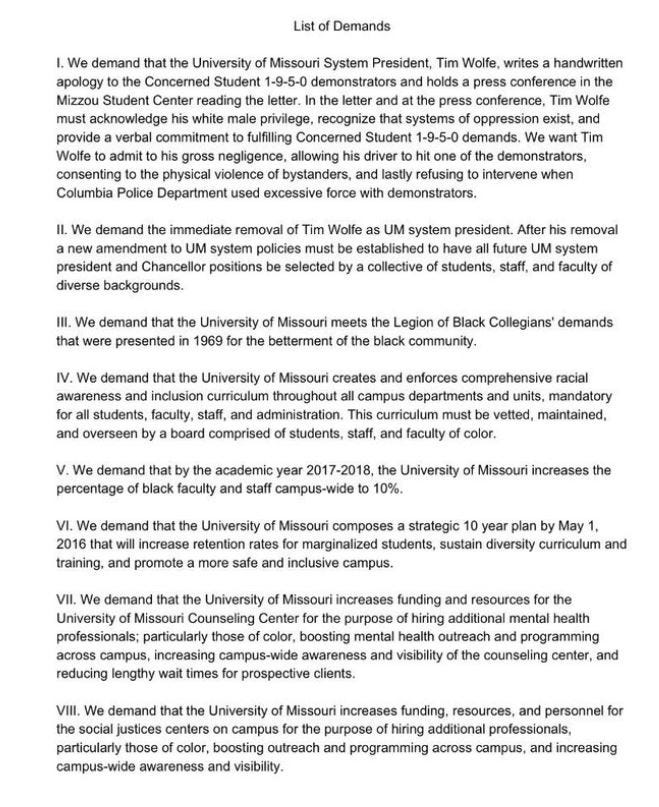 I spent like an hour trying to catch up on this Missouri football story last night about how black players are on strike till the President of the school resigns. Per Kmarko’s blog about it yesterday here is a long article detailing the background of the racial tension at Missouri from the Washington Post. And here’s a clickable timeline of everything that is going on.

Ok so as far as I can tell there were 3 incidents in the last few months? Two of them involved drunk white kids calling black kids who were already involved in social activism on campus the N word. One of the victims was actually the President of the Student Body. And then somebody smeared a swastika on the wall with human poop. Real gross move.

Anyway black students weren’t happy with President Wolfe’s response to these incidents so one dude went on a hunger strike and even more people became mad that the school wasn’t taking this hunger strike seriously enough. Then students interrupted a parade and approached the President’s car and when he wouldn’t get out and talk to them they got mad again. Now all the black football players at Missouri are saying they won’t play football till the President is removed. It’s wild.

Listen I got no dog in this fight. I hate racists and I hate serial protesters equally. I know nothing about this President. I’m sure I simplified what is happening. But from a white northern perspective this seems like a DRASTIC overreaction. I mean the main complaint seems to be that the President didn’t act fast enough or forcefully enough? Because he keeps saying he is willing and wants to make changes. He apologized for not caring enough about the hunger strike kid. He apologized for not getting out of his car when he was ambushed. Yet there seems to be no flexibility on the other side. The students list of demands basically say he has to admit he has white privilege and then resign. That doesn’t strike me as a group really looking to make positive changes. Again from a outsider’s white male privilege perspective it seems like this is protesters run wild.

COLUMBIA, Mo. — University of Missouri president Tim Wolfe has resigned amid criticism of his handling of racial issues on campus. The announcement came at a special meeting of the university system’s governing body, the Board of Curators. “I take full responsibilty for the actions that have occurred,” Wolfe said a a news conference. “I have asked everybody to use my resignation to heal. Let’s focus in changing what we can change today and in the future, not what we can’t change in the past.”

Crazy shit.   Almost seems like the school was taken hostage by these protesters.  They left him no other choice even though I still don’t think he did anything that horrific.   My guess is he got a pretty sweet payout/deal to step down and just put this thing behind them.  Regardless there seems to be this feeling in America right now that every protest by every group is automatically correct and they are heroes regardless of how they go about accomplishing their goals.