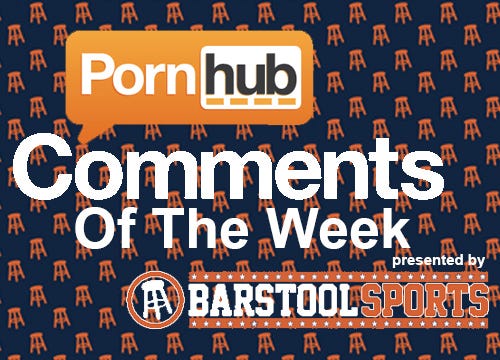 If it’s Friday, it’s Top Pornhub Comments of the Week. We’re gonna be doing this a little differently this week after hearing the news last week that our boy BarackNDatAzzObama is retiring from the game. Also, it would appear that our boy 69luv69 has just disappeared and/or maybe died (hopefully not but who knows). So with that news, I figured we’d take a look back and see all the greatness that these two heroes have blessed us with over the weeks and give them the respect and honor they both deserve. [Quick Disclaimer: I don’t save all the links to the videos with the comments that match up to them so you’ll all be on your own to find pornog to Jay-Oh to this week. Sorry]

I’ll never forget the day that 69luv69 brought the term “GANGBUSTERS” into our lives. I feel like it was like witnessing the first time someone threw down an alley-oop in basketball. Just a revolutionary phrase.

This is where I really started to believe that maybe this is actually Barack Obama running this account. #MakeThePornhubCommentSectionGreatAgain

Again, just a solid use of the term “Gangbusters”. The way 69luv69 would throw that term around with ease was so inspiring.

I’m glad Barack really let himself have fun with this one. Every now and then, it’s important to treat yo self. Well with zero seamens left in his balls, I think it’s safe to say he treated himself.

Sometiems 69 would get a little carried away but I loved it. Sort of reminds me of when Vince Vaughn goes off-script and just rambles. These were the times when you really got to know the real 69luv69.

This is when you realized that BarackNDatAzzObama’s username will be hanging in the rafters one day.

Was it actually a catch? We may never know. But if BarackNDatAzzObama says it was a catch, well then I’m willing to swallow my pride as an Eagles fan and admit that Dez caught it.

(tough to read, I know). This is what 69luv69 was so good at. His ability to throw in some quick hit one liners was unrivaled. LAY SOME PIPE is right.

And you know what? I don’t blame him.

How dare that little slut Courtney Stodden disappoint the Great One like that?

A little tough love never killed nobody. BarackNDatAzz was never afraid to tell it how it is and that’s what was so special about him.

And there you have it. 2 of the greatest who have ever played the game have come and gone. It’s the end of an era and they will both truly be missed. But here’s to hoping that there are other freaks out there who will quickly take their place and climb their way up the ranks. Hope everyone enjoyed the trip down memory lane and if you ever come across any great comments yourself, feel free to send them in to @BarstoolJordie on the Twitter machine. Have a great weekend, you guys. And stay sexy out there.