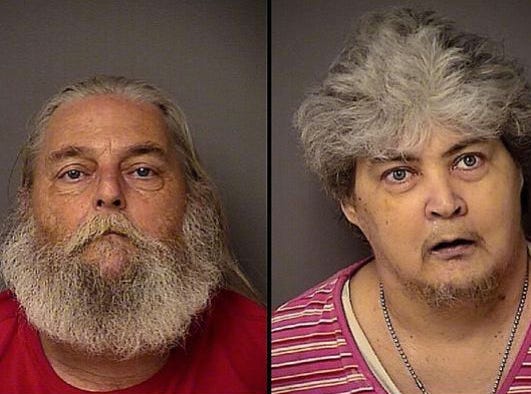 WOWKTV - Raymond Sutherland 56, and his wife, Debbie Sutherland, 54, were arrested in Osceola County, Florida and charged in connection with the abuse of his 81 year-old mother. According to a news release, deputies were called to a medical rehab center where Sutherland’s 81 year old mother was being treated. The woman had fallen and asked her son for help getting up. She eventually blacked out and was lying on the floor in a pool of blood. After some time, Sutherland called for medical help, according to a news release issued by the Osceola County Sheriff’s Office in Florida. Deputies questioned Sutherland and asked if he had hurt his mother. The 56 year old told deputies he was on medication and could not remember because he often blacks outs. Raymond Sutherland has been charged with Battery on a Person Over 65 Years Old, Aggravated Battery on a Person Over 65 Years Old, Aggravated Abuse of an Elderly Person and Neglect of an Elderly Person with Great Harm. Debbie was charged with Battery on a Person Over 65 Years Old, according to the same news release.

How adorable is that? #Goals. Just a man and his wife, connected by the bond of facial hair. It’s just so nice to see a couple that has it all together. In this day and age where everyone is getting divorced and the sanctity of marriage isn’t what it once was, it’s so refreshing to see Raymond and Debbie have matching beards. Sure Deb’s isn’t quite there yet, but not bad for a lay-dee.

And boy do they have it all together. Just taking trips to the nursing home and beating up Raymond’s mother. That’s called teamwork. Matching beards, beating up old people, they truly are a great couple/married brother and sister.