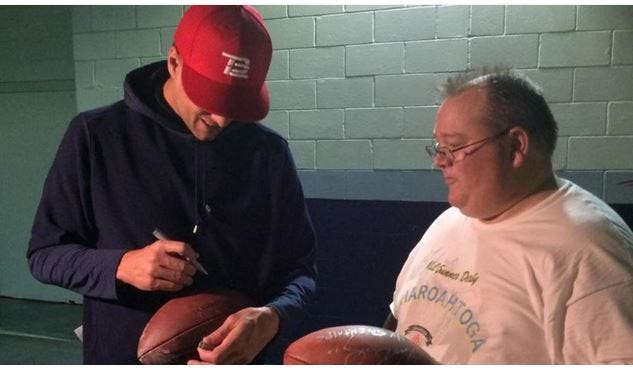 Bostonherald - He may not have ended up with the football Tom Brady threw for his 400th career touchdown pass, but lifelong Pats fan David Bowen — who graciously returned the ball after it was handed to him on Sunday — got to meet the star quarterback face-to-face at Gillette Stadium this afternoon. “He was very generous, he was very nice to us, it was overwhelming, it’s something I’ll remember forever,” said Bowen, 49, of Plymouth, who was sitting near the North end zone during Sunday’s romp over the Jacksonville Jaguars when Pats receiver Danny Amendola handed him the prized football.

Bowen, who has had season tickets since 1985, said soon after he was presented with the ball, a Patriots ball boy ran over and asked him if he’d be willing to swap it for another game ball — which he agreed to. “I said ‘sure, no problem’ and they just gave me another one,” Bowen said. And now, thanks to Bowen, Brady’s “400 ball” is on display in The Hall at Patriot Place. And Bowen got something much more valuable, the chance to meet his favorite player.

“He signed some stuff for me and thanked me for returning the ball,” said Bowen,  who works in software quality control in Braintree. “I got to congratulate an icon on this amazing accomplishment and what he’s done. It was great.”

This guy is the fucking best. From his awful haircut that is so bad it’s good to the fact he’s wearing a Pharatoga shirt to meet Brady.   I love everything about this guy.   Just a pure and true Patriots fan. Never thought about keeping the ball. Never tried to hold it ransom. Just happy to be in the right spot at the right time and enjoying getting to meet Brady. Good for this guy.

PS – If you’ve never been to a horse track close your eyes and picture 1 million of these guys running around and that’s pretty much it.  Seriously this may be the most horse racing looking dude who ever lived.