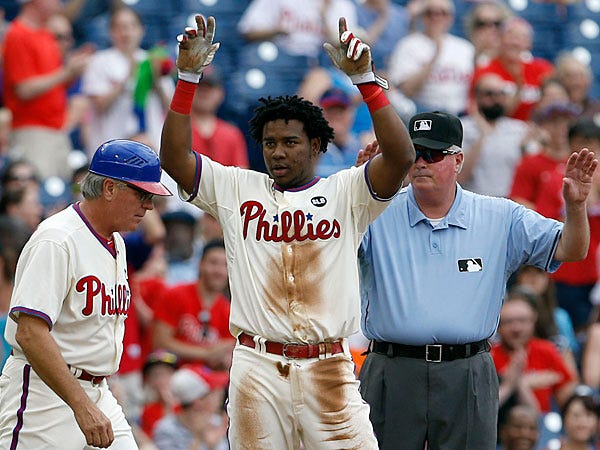 CSN – Maikel Franco and Ryan Howard could both end the season in the Phillies’ lineup. Franco, out since suffering a fractured left wrist on Aug. 11, will play in games in the Florida Instructional League through Wednesday. He will return to Philadelphia on Thursday. Barring a setback, he could play the final three games of the season over the weekend against Miami. “He says he’s feeling great,” manager Pete Mackanin said. “He’s swinging the bat with authority.”

You’ve got to be fucking kidding me, right? How does anyone in the front office think this is a good idea? Now, don’t get me wrong. Play Ryan Howard until the cows come home. Put him out to Pasture and hope he never finds his way back. That boy is dead and I have no problem with him finishing out the year. BUT FRANCO? Literally the only shining star in this abysmal six months we call the Phillies season and they want to bring him back for the final three games? its not like they’re gonna fill the seats with this decision. Let the kid relax, get some more practice in with the repaired wrist and lets boogie next season. The last thing anyone would want is for him to get up to the plate, get plunked on that wrist,and for it to be shattered again. Figure it out, Phils.