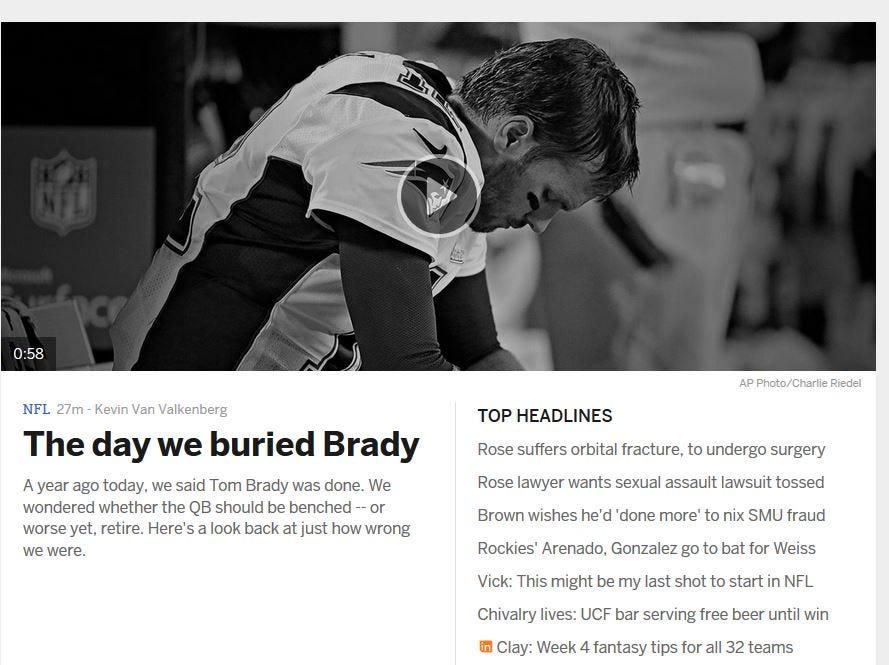 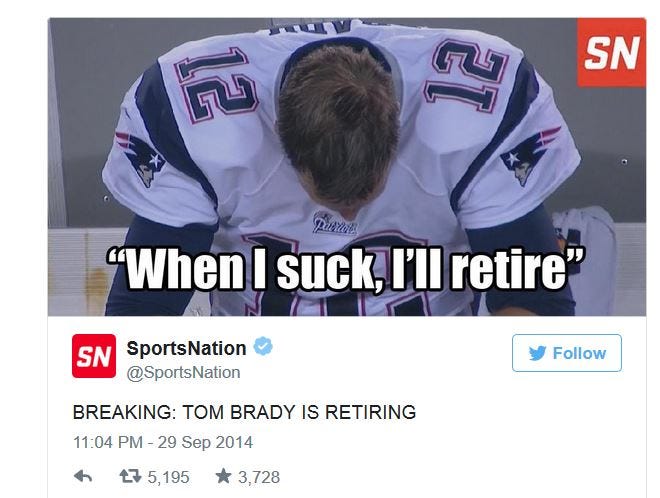 So the front page story on ESPN right now is basically a mea culpa for Trent Dilfer Day. ESPN admitting how wrong they were when they proclaimed us dead. They basically showed how everybody from the Boston Globe to the Asia World News were all saying the same thing. Patriots suck and are a weak team.   Of course there was 1 media outlet that was right all along…

My Immediate Reaction After The Chiefs Game Last Year

“Well that sucked. Get ready for the entire world to throw dirt on the Pats grave. Can’t really blame em at this point. Offense stinks. Brady stinks. Defense stinks. But here is what you got to remember. It’s week 4. The team we watched today won’t resemble what this team looks like in 10 weeks. That’s the team that matters and I’d still put money on the fact that team will be a superbowl contender.  Bottomline is you don’t win Superbowls in September unless you’re the NY Jets.”

Rundown the Next Day

Anyway me bragging about being right isn’t the point of this blog. You didn’t need my giant brain to get this one correct. You just needed common sense. That’s not what this is about. Instead ESPN must think we’re fucking stupid. Like oh let’s get some hick reporter nobody has ever heard of write a front page story apologizing to the Pats for doubting them and Pats fans will let bygones be bygones about Deflategate. WRONG DUDE! Listen I don’t care if people are wrong about opinions no matter how stupid their opinion may be. Hell I was wrong once. I said Notre Dame would beat Alabama in the National Championship. I was wrong and deserved to be mocked that one time. So I don’t hate ESPN and the rest of the world for burying the Pats. Yes they were stupid and idiotic and I laugh at them, but I don’t hate them.

BUT when you intentionally lie about facts and don’t correct misinformation and refuse to take responsibility for your actions that’s when I hate you.   Deflategate was never about opinions. ESPN and Chris Mortenson spewed lies and passed them off as facts and were never held accountable for their actions. That I can’t forgive. To this day ESPN still hasn’t apologized or fired Mort.   And until that happens I don’t care what ESPN says or does they an enemy of the state and should be harassed by Massholes at every opportunity.