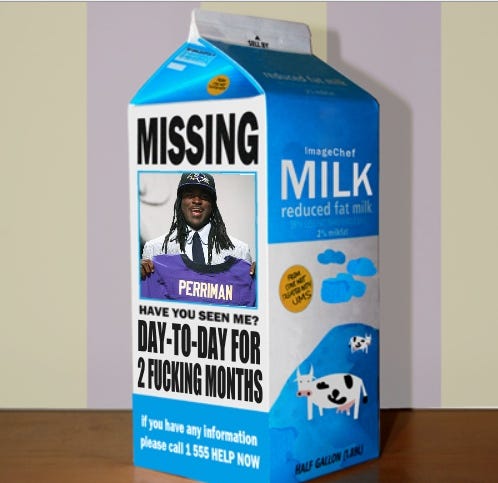 “I honestly didn’t get to do too much with him last week,” Flacco said. “I know he was out here going through a little bit of stuff, but I have no idea how he feels and what’s actually going on. I didn’t get to throw to him. It’s not something that I’m going to worry about until I know for sure that he’s coming back. Just tell me when he’s coming back. Other than that, don’t really bother me with it, because it’s not something we can worry about at this point.”

The Ravens have missed the playmaking ability of Perriman. Steve Smith is Baltimore’s only wide receiver with more than six catches after three games.

ESPN Yesterday — Baltimore Ravens coach John Harbaugh repeatedly said he is unaware of any setback for first-round pick Breshad Perriman. The No. 26 overall pick in this year’s draft, Perriman was making progress from a sprained knee suffered in training camp and practiced on a limited basis twice last week. But he pulled up while tracking a deep ball before Sunday’s game and hasn’t practiced since. This was the exchange between Harbaugh and a reporter after Tuesday’s practice:

Reporter: Did Perriman have a setback because he hasn’t practiced the last two days?

Reporter: In warmups, he was going after the ball …

Reporter: So was there any setback?

So, the uncertainty surrounding Perriman continues. 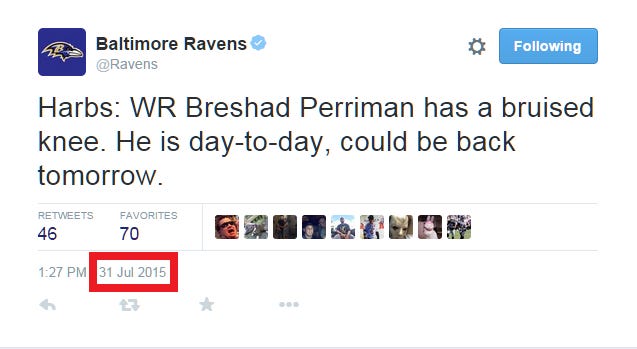 See that red box on that tweet right there? That says July fucking 31st, 2015. It’s completely ridiculous that we’re still sitting here wondering where this guy is. I realize that diagnoses are wrong sometimes. I realize Breshad actually has a sprained knee and not a bruised knee, and that setbacks happen. I’ve been there. It’s not exactly an injury you just ice up for a couple of days and jump right into the swing of things, and no two knee sprains are the same. But the point is that the team has completely mishandled this injury from the get-go. Why not take the precaution to make sure you have the right diagnosis before you start putting day-to-day labels on your highly touted rookie receiver?

I’ve tried to keep a level head on this situation for the past 2 months. I’ve chalked it up to “ah, these things happen sometimes”. But these comments from Flacco and Harbs this week have been wildly frustrating to hear. It’s clear that both of them are absolutely fed up with waiting around for this guy. What’s further frustrating is this isn’t such a huge issue if

1. The Ravens could just close out a goddamn football game or two and

2. They had just done the due diligence in the first place to diagnose the injury before making a “day-to-day” proclamation

The main point is this. Ozzie’s offseason gameplan on the offensive side of the ball (letting Torrey Smith walk, not signing any FA WR’s) was completely predicated on Perriman being a vertical threat. Without that function, this offense is a shell of itself. Campanaro and Aiken are 10x more effective when safeties have to stay on their heels for a deep ball. He’s gotta be out there, but now I have my doubts whether Perriman will ever see the field until after the week 9 bye, if at all this season. And let’s not forget that he’s an unpolished prospect that’s a whole training camp behind in learning the ropes.

I had my fears from the very night the Ravens drafted him that he was your classic flashy WR bust who could run like the wind but couldn’t catch a cold. Now add “fragile” to that phrase and it’s hard to get excited about the guy anymore. It’s just been a gigantic headache, and now it’s getting to the two most important guys in the building. And that’s a huge distraction when those guys have 3 days to prepare for a pivotal road football game. The incompetence with how they’ve handled his recovery process has frustrated everybody. Sure some of our frustration is misdirected because of 0-3, but the fact remains that Breshad Perriman hasn’t been making many friends in Baltimore. He won’t until he’s out there producing, and that ever happening is extremely hard to picture at this point.