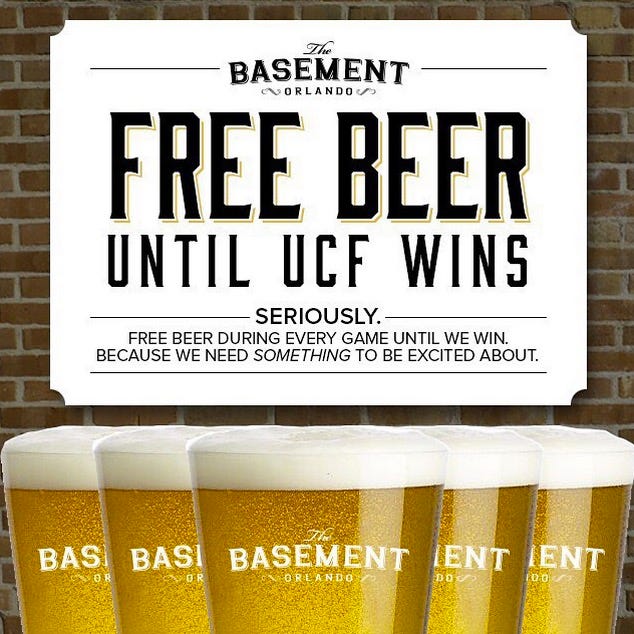 ESPN - An Orlando, Florida, bar that used to be packed with UCF fans on football Saturdays has seen its business dwindle as the Knights have gotten off to an uncharacteristic 0-4 start.

So the establishment, called The Basement, is getting the attention of the locals by announcing it will be giving beer away for free during the team’s games until the Knights win.

“We have taken great pride in the team and we very much consider ourselves a UCF bar, as we’re operated and staffed by graduates and even some current students,” said Jake Whitacre, the bar’s marketing director who graduated from the school in 2012.

Whitacre said the bar, which is located in downtown Orlando about 15 miles from campus, had roughly 50 people watching the team’s loss to South Carolina this past weekend. The bar’s capacity is about 150.

“We hate to see the place like this,” Whitacre said.

How do you know you’re having a bad season?

When a bar is willing to give away literally its entire source of income and the livelihood of all its staff just to try and help your fans black out and forget about it.

Seriously UCF, what happened? Two years ago you were 11-1 beating Baylor in the Fiesta Bowl. Last year, not as great, but still 9-3 with another Bowl appearance. Now? 0-4. Losses to freaking FIU and Furman. Embarrassing merchandise gaffes:

And bars having to resort to pouring their profits down the drain just to get people to show up to watch you. Rock bottom.

Let’s be honest though, genius business plan. No doubt this place is absolutely packed from all the attention this weekend – they’re already opening up an extra section expecting crowd overflows.

Whitacre said there has been so much buzz about the promotion, since the bar made the announcement on Monday, that the ownership is going to open up the nightclub above The Basement to accommodate an overflow crowd of up to 200 more people.

And how much money are you really going to lose on the keg beer you’re giving away? Once people get 4 or 5 of those in their system they’ll be opening up their wallet for shots and liquor drinks – that’s personal experience talking right there.