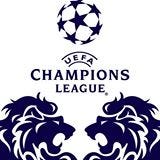 Big week of Champions League action coming up but every time I check my phone it seems like I’ve gotten a new notification of another key player who will be out with injury. But we’ll get to that in a minute. For the moment, let’s all bow our heads and say a little prayer for the EPL… 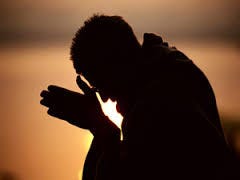 Can you imagine the shitstorm of Chicken Little-ing that would be unleashed if English clubs reproduce another impotent midweek performance like the one witnessed two weeks ago? Heaven forbid.

But that was mid-September. This is late September, so top clubs have had a few more weeks to get their acts together and are finally rounding into midseason form.

So a quick reminder of what happened in the first week of group stage games: 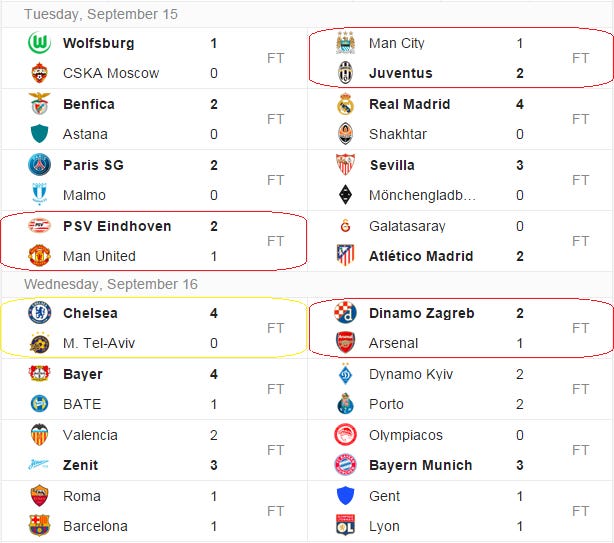 – La Liga came out of the gates winning three games on Tuesday (Sept 15) by a cumulative total of 9-0… but proved vincible on Wednesday as Barça managed only a draw and Valenthia lotht.

– Bundesliga clubs quietly had themselves a mighty nice week… apart from Mönchengladbach, which – with 7 points from 7 matches domestically – may soon have plenty of extra time and energy to focus on league games.

– United, City, Arsenal and Chelsea all took leads and looked in control of games early. The first three all lost. Not a good look, though with two of the games on the road and the other against a returning UCL finalist, there are mitigating factors to suggest it wasn’t the unmitigated disaster matchday as some people painted it.

– Only two Serie A teams made this season’s group stage, which is good in the sense that there isn’t a Mönchengladbach/Valenthia/Arsenal-like weak link to weigh on the league’s overall performance, but means all their eggs are in two baskets. Solid start for the Italians though with Juve’s win away at City and Roma’s draw against the odds-on favorite to win the whole shebang.

– Speaking of oddsmakers, this is how they see each club’s chances of winning this season’s Champions League: 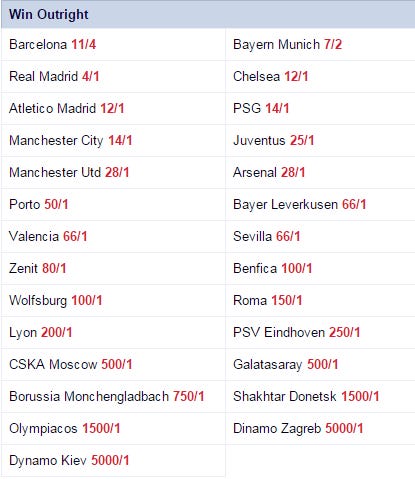 As for this week’s schedule: 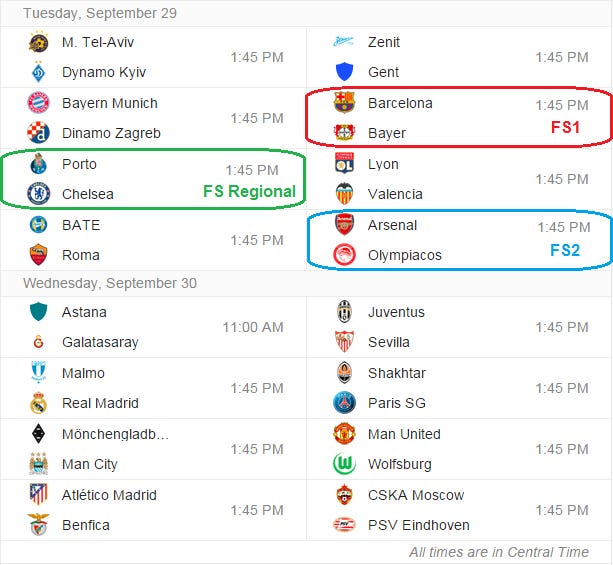 As mentioned previously, we’ve got a ton of freshly suffered injuries that will have a major impact on this week’s fixtures and are thus worth noting, most important and troubling of which is of course 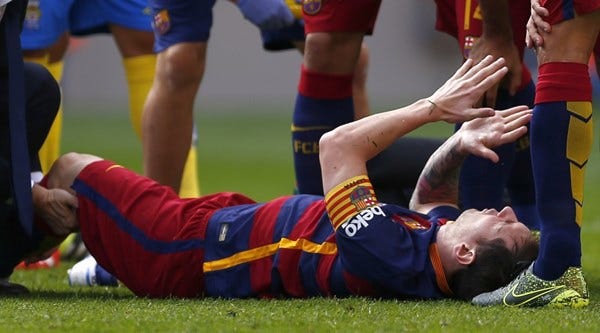 Other key players that will be missing through recent injuries (and suspensions):

If ever there was a game to pick against the Catalans at the Camp Nou, this may be it. The club has been hit by the injury bug, Neymar may be a little frazzled after having $50 million in assets frozen – Q: what’s the difference between Barça players and Wesley Snipes? A: not much – and the club has quite simply looked a bit out of sorts, losing 4-1 to Celta Vigo last midweek and squeaking past Las Palmas on Saturday.

Bayer, on the other hand, come in looking solid (aside from a 3-0 whitewashing by an in-form Dortmund a couple weeks ago) after spanking BATE 4-1 last matchday and taking care of Mainz and Werder in the league. Make no mistake, this is an experienced side with enough talent to cause the home team problems. If we’re being honest, I’m probably stay away from this game. But since you gotta give the people what they want (and Fox Sports has chosen it as the FS1 game of the day), I’ll go with a very highly extremely unconvincing 2-1 win for Barça. 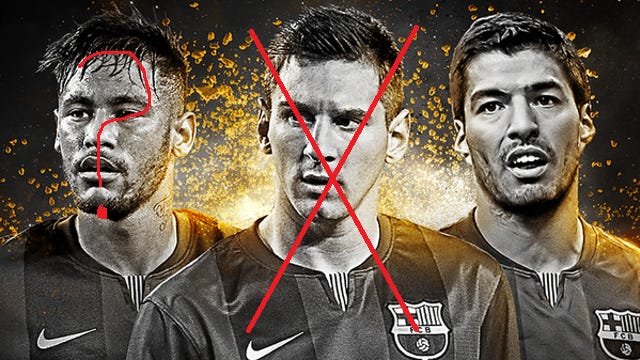 Arsenal FINALLY put in an Arsenal-like performance this weekend in overrunning Lester’s defences, marking the first time the club had scored more than two goals in a game since MAY when they pounded an overmatched Villa in the FA Cup final. I’m not a big fan of the club [massive understatement] but when they are playing flowing soccer it can be rather impressive. That said, the club was already thin at the defensive midfield position and could be missing their top two options (Coquelin, Flamini, Mikel Arteta), which would raise serious question marks. Olympiacos was spanked last time out by Bayern, and is the ugly duckling of the group, so three points at home is absolutely crucial for the Gunners. Like the last game, file this under “games I don’t love but am offering a prediction on anyway” – and this is assuming Coquelin CAN play – I’ll go with a dicey 2-1 win for Arsenal. 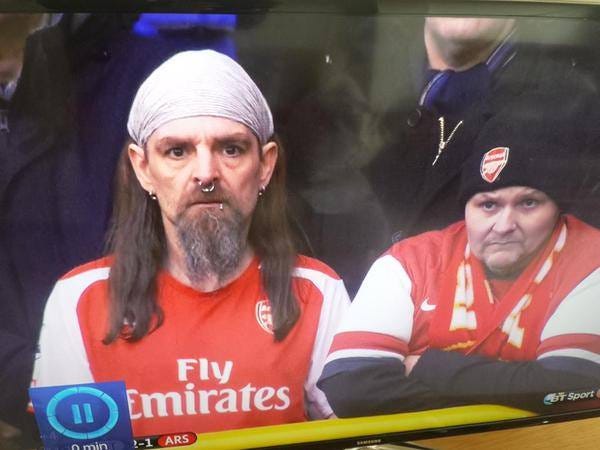 Arrrrrrrrrr we parachuting into Europa yet?

Other games: Chelsea (+250) visit Porto (+120) in the “Jose Mourinho Bowl” and if you are debating about which game to throw a little money on this is the one. Apparently the bookies have not yet caught on to the fact that this ain’t yo daddy’s Porto, and while the Blues looked all out of sorts at the weekend I have absolutely zero doubt that the Special One will sprinkle a little bit of his magic dust on today’s line-up and come out with a win. Tough to imagine it will be one of the quintessential defense-first performances, because Chelsea doesn’t even have a bus to back in front of goal if they wanted to, but they have enough attacking options to make up for it today. Chelsea to win 3-2. Also, Bayern Munich at home is as close to a sure thing as ever there is… but when you can get odds on Dinamo of (+2500) to win and (+1000) to draw you would be an idiot not to at least dabble on the Croatians after they showed against Arsenal that they are no pushovers. Speaking of sprinkling, I’ll probably sprinkle a little on both, but my official prediction is a 1-1 draw… not necessarily because I think it will happen, but sometimes you just gotta buy a lottery ticket. 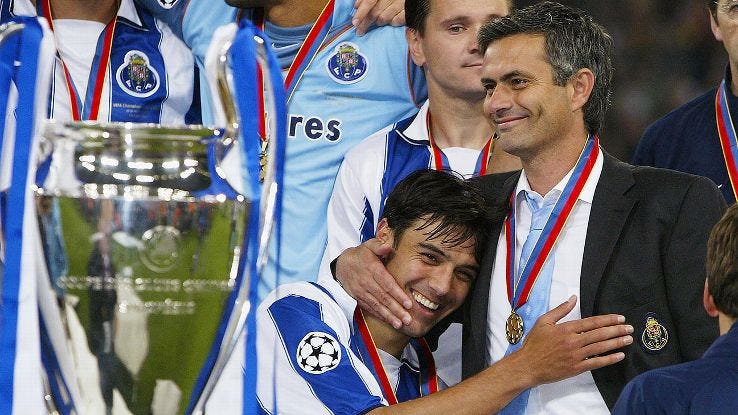 So there it is, Barstool’s best ever Champions League preview this week. Check ya mañana.