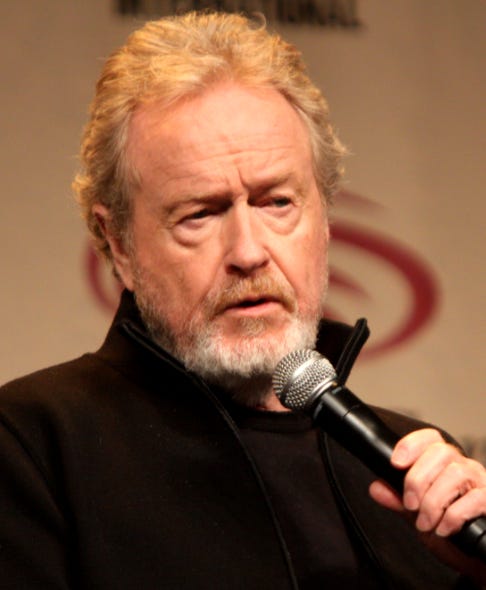 (Source) NASA’s announcement that a rover had discovered saltwater on Mars — and with it, potential life on the planet — surprised and delighted the general public on Monday morning. FilmmakerRidley Scott, on the other hand, was nonplussed by the red planet revelation. “I knew that months ago,“ Scott, the 78-year-old director of this Friday’s sci-fi pic The Martian, told Yahoo Movies on Monday. The Martian stars Matt Damon as an astronaut/botanist who gets stranded on Mars, and has to find a way to survive on the barren planet for up to four years — a seemingly impossible feat that requires him to manufacture his own water supply by splitting and fusing elements in his lab. Scott and his screenwriter Drew Goddard worked closely with NASA to make the film’s science as realistic as possible, though the space agency couldn’t answer all their questions.

“When I first talked to NASA, we got into all kinds of stuff and I said, ‘So I know you’ve got down there [these] massive glaciers.’ And he said, ‘Yeah, that the massive white thing [on the surface of Mars] that gets covered with dust, we think that’s ice,’” Scott recalled. “And I said, ‘Wow! Does that mean there was an ocean?’ Are we right now what Mars was 750 million years ago?’ And they went, ‘Uh, good question.’ So they want to go up there and find out.’”

Oh well aren’t you so fucking cool, Ridley. That whole announcement that there is water on Mars, the thing everyone was freaking out about yesterday, I’ve known that for months, no big deal. Fuck outta here man. We call this in the biz pulling a schefty. Saying that you knew about something before everyone else after it was revealed is a 5 year old move. The only purpose this serves is to stroke your own dick. Well guess what Ridley, Hannibal fucking sucked and Red Dragon blew that shit away times a million. You couldn’t hold Bruckheimer’s jock strap if you tried.

Love how Ridley also added in the fact that he “stumped” Nasa with a good question about glaciers on Mars. If this is just an entire ploy to deflect the fact that you put Matt Damon’s character from Interstellar into it’s own movie it won’t work, some of us have brains, whether we knew about water on Mars months ago or not.