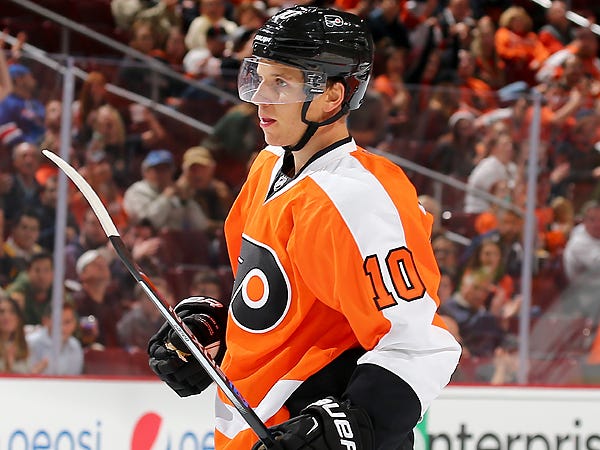 After being acquired from the Kings as the main piece in that Mike Richards trade a few years ago, Brayden Schenn is still yet to find his full potential yet. He’s been a 40-point guy the past two seasons with the Flyers but Flyers fans and Flyers management have still been wishing for more from the 24-year-old. This year Baby Schenn entered the Flyers training camp heading into a contract year and hasn’t really received a ton of praise from Hextall and Hakstol (still think we need a shirt for that combo). Both of them have been saying that he’s been just “okay” and that has trade-bait written all over it. But just when you think that Baby Schenn couldn’t put himself any further into the dog house, he goes out there and does something like this….. AND TOTALLY REDEEMS HIMSELF.

Sure, it may only be a preseason goal against the Isles‘ B team but whatever. That move was still dirty regardless of the competition. B. Schenn is playing with a chip and I can appreciate the hustle. He knows he has something to prove this year and hopefully all the criticism or lack of support from the coach and GM only fuel his play for the rest of the season instead of breaking him mentally. It should be interesting to see where he fits into the lineup this year though. You gotta figure the lines at this point look a little something like this

And they still need to figure out what to do with Laughton. I really don’t like having Umberger in the lineup (Hot Take, I know) even though he got that hip surgery and has been looking like he has a little extra gear in his step. He’s just too old. With his loose skin and his old balls. Gross. But the fact still remains that Brayden Schenn, somehow, has to earn a spot on the lineup this year. I think he’d have the best chance to reach his potential playing with Coots and Simmer again, knocking Read down with Vinny and Gagner but we’ll wait and see what Hakstol has in mind. Either way, this definitely isn’t what Flyers fans had in mind when Schenn came over from Los Angeles right after being the named the MVP of the World Juniors that year.