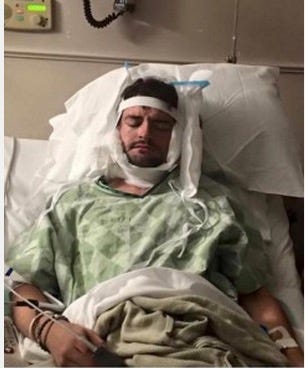 Hotty Toddy – Ryan Moore, a 22-year-old Ole Miss student from Tupelo, was walking with friends in downtown Tuscaloosa when he was allegedly sucker punched by an angry Alabama fan after the Ole Miss vs. Alabama football game at Bryant–Denny Stadium Saturday night.

The punch broke his jaw in two places, and Moore has been in and out of surgery since Saturday night.

Mike Moore, Ryan’s father, said that their number one priority is getting him back into good health. Once he is in better condition, they plan on filing a complaint with the University Police Department. The next step would be for UPD to send the complaint to the Tuscaloosa Police Department.

According to Moore, Ryan was walking to his car with a group of friends in downtown Tuscaloosa 30 minutes after the game. They were celebrating the win shouting “Hotty Toddy” and (allegedly) an irate Alabama fan blindsided Ryan (who didn’t see the punch coming) between Salon 5 and Pizza Hut.

The Alabama fan is described as a white male with salt and pepper hair, weighing about 220 pounds, with an athletic build. He was wearing a dark-colored Alabama shirt and jeans and was walking with a woman and two little girls.

“Ryan was set to graduate this December. He was really excited to finish from Ole Miss and get his degree. Now with all the surgery and recovery process, we aren’t sure he will be able to finish by then,” Moore said.

Listen I in no way condone sucker-punches and think they’re cowardly bullshit, and the last thing I would ever do here is stand up for the Alabama dude who planted a cheap shot on this kid and laid him up in the hospital. Guy is a total scumbag (while you’re with your wife and kids dude? Really??) But just speaking in terms of, you know, SEC Football, big time college football games in the state of Alabama…this can’t really be that out of the ordinary right? I mean were there not 8-9 police reports of this same exact thing happening all over the Bryant-Denny parking lot?

Just seems like you win a huge rivalry game then march around the opponent’s stadium yelling HOTTY TODDY at the top of your lungs…you automatically get knocked out by someone? Head on a swivel x 1 million, constantly checking your flanks for where the punch is coming from. Basically if you want to do that your only safe option is to form a “300”-style Spartan phalanx like Leonidas with your buddies and slowly move to your car as a unit to avoid getting your jaws broken, at least that’s my understanding of the culture. That’s just college football life in the South.

Like I said I hope they catch the Bama asshole who did this and he gets what’s coming to him, just saying, kind of have to be expecting something like this considering what you were doing and where you were. Madden Awareness Rating leaving a lot to be desired.

I would bet every penny in my bank account that the dude yelled ROLL TIDE when the punch landed, some things are just easy money.