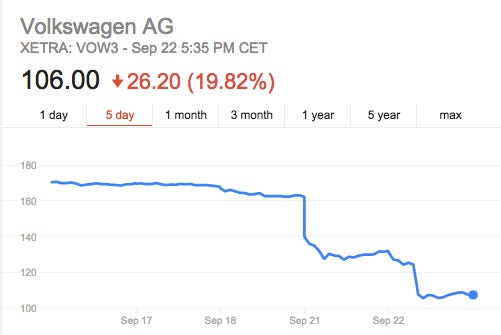 So between the Pope coming to America and Yogi Berra dying, this Volkswagen scandal thing has been in the news too. Here’s the summary of what they did to sell cars:

BBC – It’s been dubbed the “diesel dupe”. The German car giant has admitted cheating emissions tests in the US. According to the Environmental Protection Agency (EPA), some cars being sold in America had devices in diesel engines that could detect when they were being tested, changing the performance accordingly to improve results.

VW has had a major push to sell diesel cars in the US, backed by a huge marketing campaign trumpeting its cars’ low emissions. The EPA’s findings cover 482,000 cars in the US only, including the VW-manufactured Audi A3, and the VW brands Jetta, Beetle, Golf and Passat. But VW has admitted that about 11 million cars worldwide are fitted with the so-called “defeat device”.

So this is a big deal to a lot of people. The country of Qatar has lost 5 billion dollars because of it. And now the CEO is resigning, you know, because the stock has plummeted, everyone is losing money, and he’s mostly to blame and will likely get murdered.

Now here’s my question, as a guy who is trying to jump into the stock game: do you buy VW? Look how it’s done over the last year:

It was up over 250, and now it’s at 112. Nowhere to go but up, right? Chicks are still going to buy VW Bugs and Jettas until the end of time. So they made a tiny little mistake and lied about emissions in diesel cars, it happens. But as a new guy in the stock game, all I want to know is if I can make money off of this. A person on Twitter told me because it’s a foreign stock I’ll be taxed in Germany or some shit, so that’s rather off-putting, mostly because that sounds really intimidating. But besides that, no brainer right? Kinda like Twitter stock? I’m just a guy trying to diversify that portfolio, trying to get on that strong to very strong level.