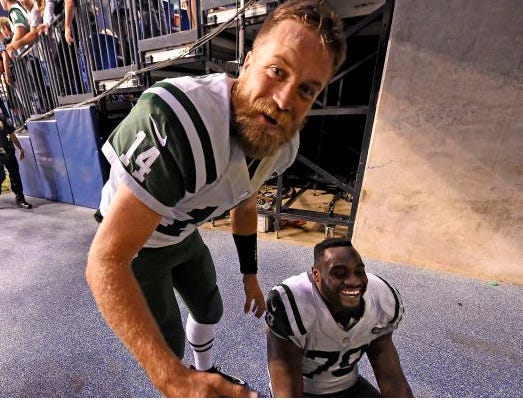 CBS – When Geno Smith returns from his broken jaw, his starting job won’t be waiting for him. On Tuesday, Jets head coach Todd Bowles announced that Ryan Fitzpatrick will remain the team’s starting quarterback, even after Smith is fully recovered from his injury that was suffered when IK Enemkpali punched him last month.  “Ryan is our QB right now,” Bowles said, according to Manish Mehta of the New York Daily News. “We’re going good. We have good chemistry right now. Geno understands that.” With Fitzpatrick as the starter, the Jets are off to a 2-0 start. First, the Jets demolished theBrowns, 31-10, to open up the season. Then, the Jets went on the road and handed Andrew Luck and the Colts a 13-point defeat on Monday night. In those games, Fitzpatrick was 37 of 58 for 423 yards and four touchdowns. He’s been picked off twice. Still, Smith is only 24 years old and could have a future in the league. Meanwhile, Fitzpatrick, playing in his 11th season, is 32, which means that the Jets must think Fitzpatrick gives them a real shot to win now. Because by sitting Smith, they’re potentially stifling his long-term development. The Jets are clearly in win-now mode.

I’m not going to praise Todd Bowles for this move. Its the correct decision and its an absolute no brainer. He’s not some coaching genius for this choice, nor is Ryan Fitzpatrick some gunslinging stud that is the answer to all our quarterback issues. There would be absolutely zero reason for Todd Bowles to hand things back over to Geno Smith when he’s healthy. The team is 2-0, Geno Smith sucks, and Bowles has no ties to him and owes him nothing as he’s a player from a past regime. There was no other choice, and I’m just happy Bowles had no qualms about just coming out and flat out saying it.

The real reason I wanted to write this blog is to announce that Geno is not our quarterback, but neither is Ryan Fitzpatrick. Nor is Fitzmagic. The starting quarterback for the New York Jets is officially JR Fitz:

My man Joe @TurnOnTheJets from the latest addition to the KFC Radio Network coined the phrase and J.J. @JJoyJets has been making these GIFs for a couple weeks now and I’m going to need at least one of them every Sunday. Sorry JJ, hate to put you to work, but once you’ve started something like this you cant stop. The world needs more JRFitz. Next up I’m gonna need the reverse JRFitz with JR Smith’s head photoshopped on to a great Ryan Fitzpatrick highlight. There are levels to this JRFitz game, son.

5-0 heading to New England. Sweatpants from here on out. Lets gooooo.

PS – Joe and company are recording a new episode of Turn On The Jets tonight, will be out tomorrow morning. Subscribe to them on iTunes.