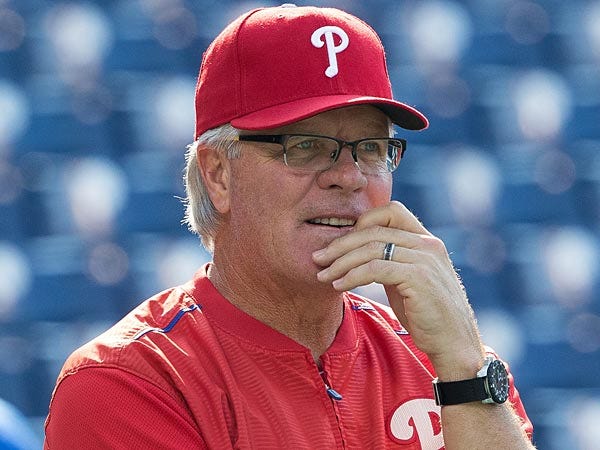 CSN – Pete Mackanin finally has lost the interim tag. The Phillies announced Tuesday afternoon that Mackanin has been named manager for the 2016 season with a club option for the 2017 season. Mackanin took over as the interim manager on June 26 after the resignation of Ryne Sandberg and has guided the team to a 30-46 record since. That includes a 21-12 stretch and a 12-2 surge right after the All-Star break. “The Phillies are pleased that Pete has accepted the position of manager for the 2016 season,” Andy MacPhail, the team’s incoming president, said in a statement. “We believe that Pete is the best fit for the role.” Mackanin joined the Phillies as a bench coach for Charlie Manuel in 2009 through 2012. He spent 2013 as a scout before the Yankees returning to coach third base for the Phillies in 2014. A baseball lifer, Mackanin was an interim manager for the Pirates (2005) and Reds (2007) and was a coach with the Expos (1997-200), Pirates (2003-2005) and the Phillies, compiling a 83-99 record. A fourth-round draft pick by the Washington Senators in 1969, Mackanin broke into the big leagues in 1973 with Texas. He also played for the Expos, Phillies and Twins.

Don’t hate it one bit. He has definitely earned a chance to manage in the show. In 2007 he took over as interim Cincinnati Reds team that was ABYSMAL with a league worst 31-51 record. He ended up going 41-39 down the stretch before Dusty Baker was given the reigns over him for the 2008 season. The man is a lifelong baseball guy having played in the show from ’73-’81 and coached in the minors to the big leagues and everywhere in between. Shit, the man even dominated the managerial ranks of the Venezuelan league for a couple seasons in which he became fluent in Espanol – A trait very much overlooked. You can give credit to Odubel Herrera and Caesar Hernandez playing better than they should because of Mackanin. He also was the bench coach during some of the Phillies glory hole run from ’09-’12, so he has been around winning before.