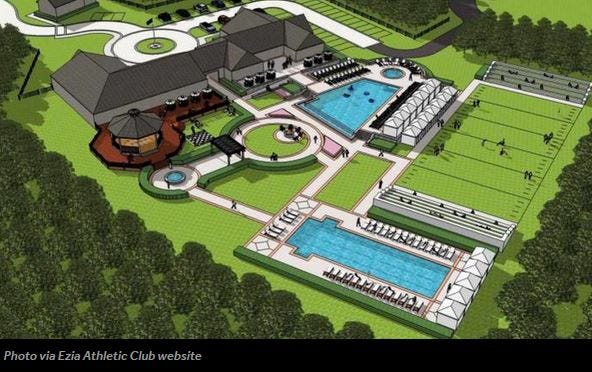 Nantucket - Isaiah Truyman is opening a $5,000-a-year Nantucket fitness club that expects to charge a $120,000 “initiation fee.” “We’re not necessarily going after the 1 percent,” he told The Inquirer and Mirror . Ezia Athletic Club, Truyman said, is expected to open in April 2017, but is already taking membership applications. The club will feature “an 11,000-square-foot indoor facility with a gym, exercise rooms, four squash courts, spa and therapy rooms, a golf simulator and small snack bar; with a pool, spa pool, volleyball court and small chipping and putting green outside.” According to the Ezia website, there will also be an olympic-sized “luxury” swimming pool, a juice bar, a business lounge, an outdoor fireplace, and an outside sports bar. The site says the club will also include an outdoor pool lounge area with private cabanas, an outdoor movie screen, and a game room. Nutritional services include private chef meal delivery and DNA and blood testing. “We’re catering to people who think $120,000 is not out of the realm of possibility,” Truyman told The Inquirer and Mirror. “There has been a lot of positive buzz, both in Boston and here on the island.” According to The Boston Globe, 30 membership slots have already been filled at a pre-opening discounted $60,000 initiation “special.”

I was getting all set to join this club till the last sentence.   30 membership slots have already been filled at the pre opening discounted 60K initiation special? What type of poor people shit is that? Is the help gonna be allowed to make eye contact too? I mean give me a break Isiah. The only reason I was going to join this club is because it cost 120K. I didn’t even plan on using the membership. I just wanted to join because I can.   But now what’s the point if they are letting in every Tom, Dick and Harry on the island? If I wanted to rub shoulders with white trash I’d vacation on the Vineyard.