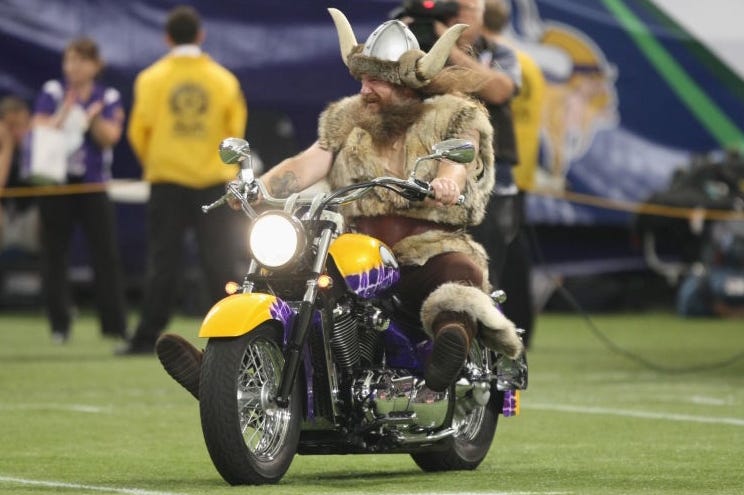 MINNEAPOLIS - Social media was buzzing Sunday and early Monday with Vikings fans wondering what happened to Joe Juranitch, better known as Ragnar. The madcap mascot, who has been on the field revving up crowds with the purple since 1994, was noticeably absent during the Vikings’ win over division rival Detroit.

A story published by the Associated Press (AP) may shine some light on why Ragnar was MIA. A person with direct knowledge of the negotiations says Ragnar asked for $20,000 per game over the next 10 years. That would break down to $1.6 million for eight regular season home games per season over that 10-year period. The person spoke on condition of anonymity because the team does not publicly discuss contract negotiations with players, let alone mascots.

Now this my friends is irrational self confidence at it’s absolute peak. Absolutely love it. Are people going to Vikings games to watch football? To see Adrian Peterson or Teddy Bridgewater? Fuck no, they’re there to see a bearded fake viking ride around on his motorcycle with a battle axe. And you know why it works? Because Ragnar is DEAD serious about it, just look at the Facebook post he put up during Sunday’s game. 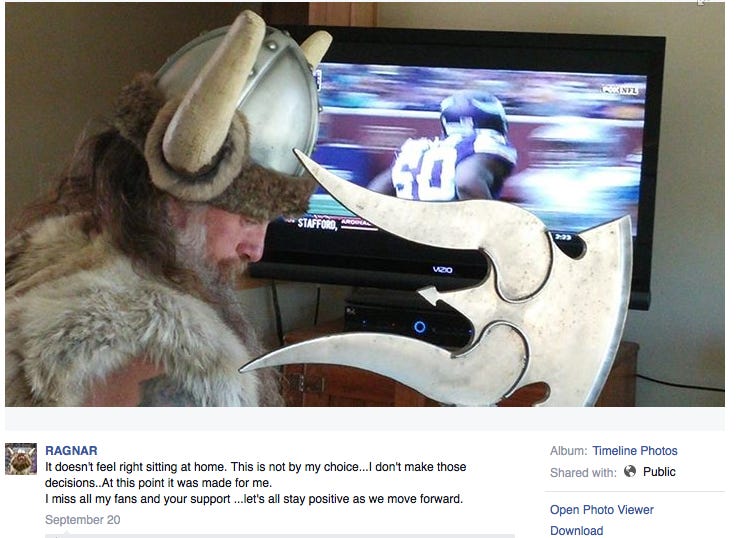 He’s in full uniform sitting at his own house. The guy legitimately thinks he’s a Viking. So if I’m the Vikings franchise i’m locking him up. Sure you can probably get any old fat guy with a beard to drive around on a motorcycle on gameday, but people see through it when someone isn’t committed. You can’t fake the delusion it takes to ask for 1.6 million to do a job most people would do for a free hot dog and a pair of season tickets, if anything it’s actually a bargain when you really think about it.

Love the comments on the Facebook page. It’s like Ragnar died or something, nope just a guy looking to get paid a TON of money to play make believe at NFL games.