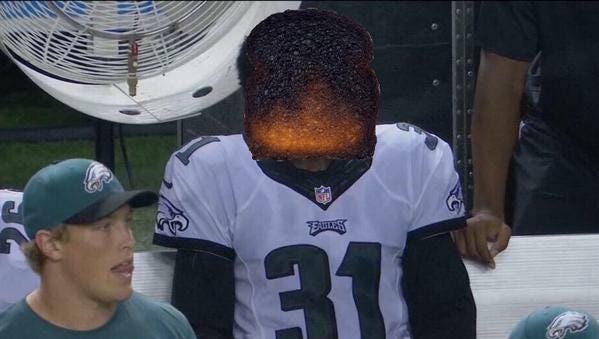 U-G-L-Y. Here’s the single half decent moment from the warm bucket of piss that doubled as a professional football team in possibly the biggest game of the season.

That’s it. A 15-yard catch was the only redeeming takeaway from yesterday’s game. And you gotta give the slightest bit credit to the defense, minus Byron Maxwell. Down 2 play-making linebackers for most of the contest and they still only gave up 13 points. That should be good enough to win a ballgame.

Also encouraging, Lane Johnson and the players seem to care, minus, again, Byron Maxwell who was caught smiling after getting torched – AGAIN. Here’s a quote from Phillymag.com – “Fucking embarrassing … You can’t go out there on Sundays and piss down your leg like we just did today.” – #65

THE ENTIRE STAFF FROM CHIP DOWN TO THE BALL BOY – 3 points in 2 first halves. Awful preparation again leads to lack of execution. Really nothing more to say other than DO BETTER CHIP. These gameplans have been embarrassingly embarrassing.

O-Line/Blocking In General – Easily the single most concerning problem for the Eagles. All day there was no push. None. In fact, we all could feel the penetration in section 240 play after play after play. 7 tackles for loss. 7. Including a sack and a dick load of runs that went for negative yardage. And it translated in all aspects of the game, but especially the running. The Eagles have 3 certified studs at RB and have 70 rushing yards – ALL YEAR. Only six teams have had fewer after two games…since 1948. That’s after a 7 yard output yesterday with Sammy B leading the way with a single 9 yard scamper. Someway, somehow the guards graded better than the rest of the OL, but it wasn’t just a big man issue. Brent Celek got bushwhacked up and down the field, too. Chip needs to figure it out and figure it out now or else this season is going backwards faster than one of his running plays.

The WR Play – Huge, multiple drops by Jordan Matthews (get your head out of your ass, kid) and then some big missed opportunities by professional catchers Miles Austin, Riley Cooper and Zach Ertz all cost this team greatly – with 86’s stone hands resulting in another game clinching INT. Riley Cooper is INVISIBLE. I would blame Bradford for not stretching the field but these guys aren’t getting any separation at all.

Bradford – Misfiring left and right and, for the second straight week, he didn’t play nearly well enough to win. I’m not ready to pull the carpet out from under him just yet, mostly because the shock would make his legs crumble to dust, but he’s gotta do better. Nothing more to it than that. Plus that INT to Sean Lee (who is a beast and was flying around the field all day) is how girlfriends/wives in the Philly area get berated for no reason all week.

Special Teams – Any day you get a kick/punt blocked that ends up as a score is not a good look for a supposed winning ballclub. 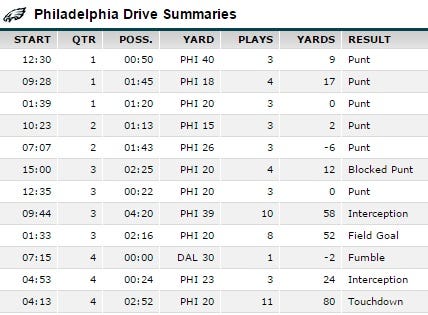 Injuries – I guess we’ll find out about the status of Kiko Alonso and Mychael Kendricks soon, but I’m not anticipating good news. Kiko has Twizzlers for ligaments in his knees and Kendricks will be bothered by the hammy all year even if he is back. That’s one injury you can’t kick till the off-season.

44-year-old Basically Rookie Back Up Brandon Weeden Torching The Eagles With A 7-7 performance.

This Happy Crap That Happened ALL GAME: Very difficult for Jason Kelce to pull and make his block when this happens. I don’t even know who to blame, the scheme maybe? That’s a tough seal for any OL to downblock a dude who is flying through gap like a bat out of hell right from the jump:

LONG season to go. Like I said yesterday, we’ve got the Jets, Redskins, Giants, and Saints on deck. 4 very winnable games. Chip right’s his ship at 3-3 and the Birds are right back in it. That on top of it’s only 2 games. The Eagles dropped their first two contests in ’03 and still ended up in the NFC Championship. The ’93 Cowboys, ’01 Pats, and ’07 Giants all started 0-2 and won the damn Super Bowl. So for as bad as it is, it’s not time to panic…yet. Now if they lose this week at the Jets, who are on a short week and the Birds are 9-0 lifetime against, the entire Eagles team needs to bring this back: