GOPers were gathering on the island for this weekend’s Mackinac Republican Leadership Conference. The alleged incident took place at popular watering hole Horn’s Bar, according to the newspaper.

John Yob, Paul’s national political director, accused Rich Beeson — whom he inaccurately referred to as Rubio’s national campaign manager — of punching him in the face and called for his termination.

“Last night I went to a bar on Mackinac Island for the GOP Mackinac Conference,” Yob wrote in a Facebook post. “I ran into a guy named Rich Beeson, who frankly I didn’t even know who it was at first because he isn’t relevant in our political world. Anyway, he is Marco Rubio’s national campaign manager. He literally physically assaulted me by punching me in the face. The state police are looking for him. I have it on video, from multiple angles. This will play out in the national media in the next few hours.”

“I am hereby calling on Marco Rubio to fire Rich Beeson effective immediately,” he wrote in a separate post.

Accounts of the bar fight differed, though.

An anonymous source alleged to MLive.com that Yob and Beeson had exchanged words earlier in the evening, suggesting that the incident was more personal in nature.

Michigan politics blogger Brandon Hall said in a Friday post that he was at Horn’s Bar when the confrontation allegedly went down, too, and recorded part of it. But Hall maintained that Yob did nothing to provoke Beeson.

“As I was sitting at the bar talking to someone at Horn’s in Mackinac Island Thursday night, I witnessed Beeson suddenly, out of nowhere, approach one of Rand Paul’s advisers, John Yob-unprovoked-and try to hit him,” Hall wrote “Beeson missed a full on shot but still struck Yob’s in the face with a powerful blow near the jaw.”

Hall noted that Beeson had been trying to whip votes for Rubio for the conference’s straw poll before the alleged incident.

Ugh, that’s it? From the hissy fit this dude threw on Twitter and running straight to the press, I was expecting a full force haymaker directly to the face with teeth and blood and American Flag lapel pins flying everywhere. 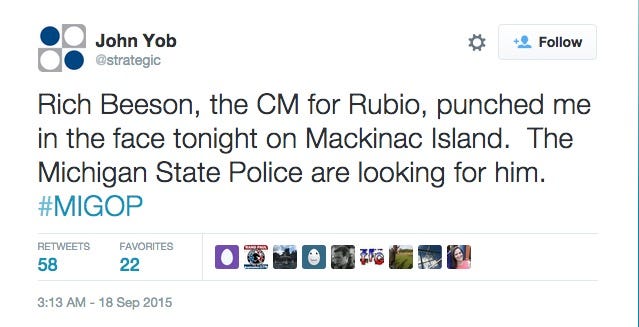 But that little love tap? This is politics my dude! Did you watch that debate the other night? It’s an all out brawl out there for the Republican nomination, and sometimes that can spill over from hard takes and rhetoric to actual physical brawling. It happens, it’s all part of the high stakes Washington power player game. You want to be a part of that? You want your guy to have a shot at the White House? Then stop crying to reporters every time you get smacked in the mouth, put your Cosmo down, get off your barstool and throw some punches back.

Jesus it’s no wonder Rand Paul is getting wedgied and noogied by Donald Trump every time he turns around, even his staff is comprised of total pussies.

Say what you want about the GOP, do NOT say there is any shortage of entertainment.