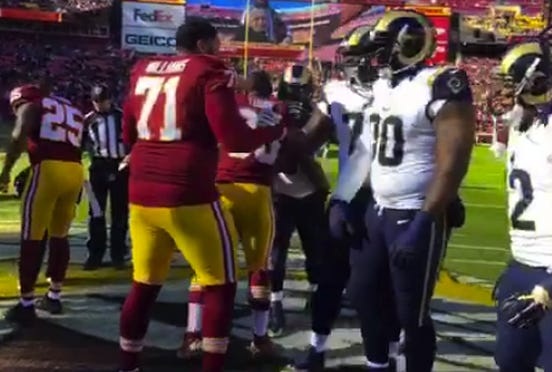 Remember last year’s Rams game? When Jeff Fischer sent out every player acquired in the RG3 trade as captains, just to rub salt in the wound? Before the game, I wrote if you go to it you’re a bad fan because you’re a Dan Snyder enabler, they were 3-17 over their last 20 games, and had missed the playoffs 18 of 22 (now 19 of 23) seasons. And then the Rams and Shaun Hill shut out the Skins 24-0, dropping the Sons of Washington to 3-10. Good fucking times. It was a terrible, dreadful game. This was my postgame blog. Depression city.

Well they get their rematch vs the Rams on Sunday. My theme this year for the Skins has been “silver linings”. We’re a bad team with some bright spots in the early stages of a massive rebuild. All we can do as Skins fans is hope to stay competitive, win some games, get the most out of the guys that are playing, and stop being the punch line of the NFL. Last week was a decent enough start. Sunday they can put the RG3 trade completely behind them by beating the Rams and that troll Jeff Fischer. The Skins lost a lot of picks and depth with that RG3 trade. But that was 4 years ago. Have to move on, and this is the time to start. Beating the Rams at home will be great for morale. Would say hey, shit didn’t work out the way we wanted 4 years ago, but we’re past that. The Rams trotted out those captains last year because they knew they were going to beat this team. This year maybe they don’t think it will be so easy.

Will the Skins win? Hard to say. Will they start off 0-4, 0-5, 0-6? Always a possibility. Silver Linings Nate says as long as they don’t have their shit pushed in and they remain competitive, that’s a huge improvement over last year. The Rams are coming off a win vs the Seahawks, so could be an early-season trap game for them. Skins are without DeSean and possibly without Jordan Reed as well. Hope they just pound the rock with Morris, play solid defense, and don’t fuck up on special teams, as they are prone to do. Winnable game and hoping for the best out there at Fed Ex on Sunday.