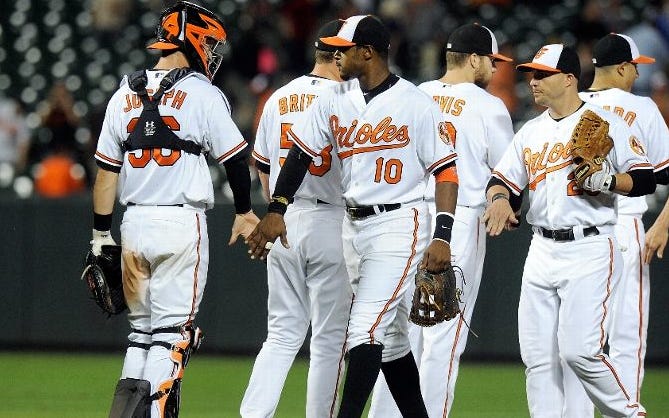 This latest run for the Birds may be too little, too late. But I love the fight in the team. Winners of three series in a row, including two current playoff teams, shelling the Royals and the Yankees, and one last place team, the Red Sox, but hey, I’ll take any series win. Winners of 7 of their last 9, the O’s are only 4.5 out of the second Wild Card spot with 16 games left…..I’m not saying they will sneak into that spot, but crazier things have happened (See Rockies, 2007). The Birds are now 72-74, 2 games under .500 after that great comeback win last night. If they go 12-4 over the last 16 games and end up at 84-78, that may be good enough for a wild card spot??? It’s a long shot, but hey, why can’t they put together one last two week run? And fuck it, I’m just an optimist at heart, would be really cool to see them stage a heroic come back like this. 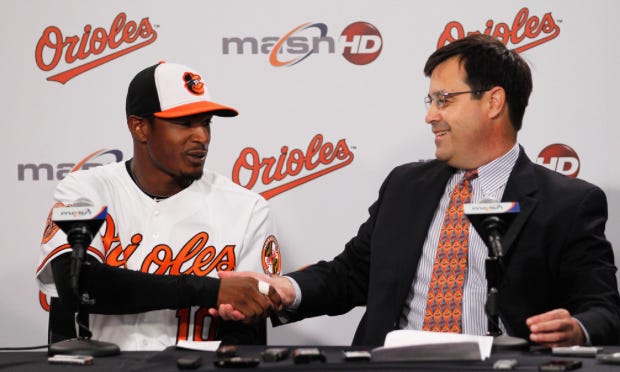 “I think after the season, I’ll let things die down a little, get away from the game and then go have a meeting -— talk to Peter, go talk to Buck, go talk to Dan and see what direction we’re going next year.”- Adam Jones from Peter Schmuck’s Baltimore Sun Article.

I personally love this move. We all remember Adam Jones’ tweet last year after the O’s let Markakis, Cruz, and Miller walk, and he was not happy, and for good reason. Jonesy is the heart and soul of this team, leader on and off the field, and I don’t think it’s a bad idea to bounce some ideas off of him. Maybe he’ll demand that DD make a trade to bring back his BFF Quintin Berry, or encourage the O’s to get a young stud free agent outfielder (Sup Jason Heyward). I think Peter and DD should hear him out on some of the ideas…even if they aren’t going to listen to him, at least get some good PR out of it?

Jones is signed through 2018 and you know there’s a bit of him that worries that the Orioles won’t spend money and make the moves to win a World Series in the prime of his career. No one on the O’s wants to win more than Jones, and he wants to win here, in Baltimore. And he knows that the O’s can’t have another shitty offseason like last year. Another offseason of spending money on the Wesley Wrights and Travis Sniders, and you bet Jones will let Duquette and Angelos know he isn’t happy, and isn’t happy with how the team is being put together around him.

I think this shows him fully embracing the leadership role that was sort of left vacant by Nick Markakis. Markakis was never outspoken, almost robot-like. Jones will let you know if he doesn’t like the song selection at Camden Yards, and I love that about him. Jones doesn’t give your typical cookie cutter answers, no cliches, he tells it how he is, and I think Peter, Buck, and Dan need to take that into consideration. Give 10 some pull in the organization. 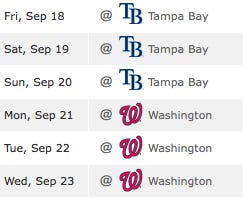 O’s took game 1 of the series vs the Rays last night with a great come from behind win, scoring 4 runs in the 8th inning ALL WITH 2 OUTS. The O’s haven’t dons that this year, normally it’s the other teams doing that against them. Maybe it only took 140+ games for their magic to start clicking, better late than never. Taking 2 of the next 3 will boost them up in the standings, and then they travel down 95 to Camden Yards DC edition to take on the Nationals. I’m sure the place will be packed with Orioles fans like it has been for the last few years, orange as far as the eye can see. I would love nothing more than to help out the Mets and put the final nail in the coffin of the 2015 paper champion Washington Nationals. If the O’s only win 3 more games the rest of the season, make it happen in DC. They will leave the capital with a series win though, mark my words.

The Birds had one bad stretch where they lost 16 of 20. Can’t have a terrible three week stretch like they did and expect to still be competitive. Even if they went 7-13 during that stretch we are right there in the thick of things. As I said above, all you have to do is win the games you play, and not worry about the other teams, but it may be too late to make up that much ground. We will see.