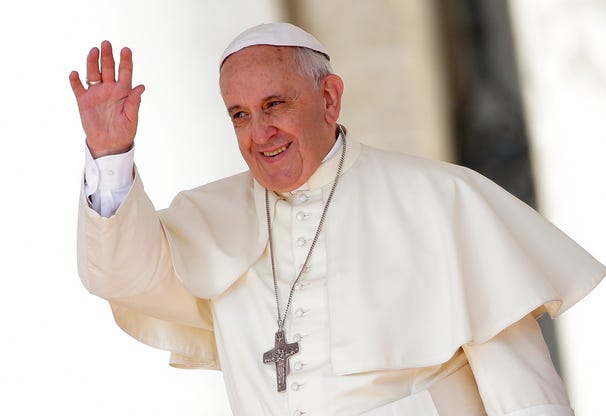 NBC – Road closures for Pope Francis’ visit next week will definitely snarl, slow and stop traffic around Washington. Metro and D.C. Department of Transportation officials unveiled a series of maps, highlighting the streets and avenues that will be affected by the pope’s visit. Pope Francis will visit the United States for the first time, starting with his arrival in Washington on Sept. 22. Tuss said 70 Metrobus routes will be impacted, plus additional traffic from people coming into D.C. will delay other routes. DDOT is telling commuters and motorists to be prepared for long delays. They suggest working from home, taking mass transit and planning ahead, leaving plenty of time to get to your destination.

If you thought driving in and out of DC was bad before, add the Pope into the equation. Good fucking luck getting anywhere next week, people who have to leave their house and go into DC for work. They are talking about commutes going up by at least an hour for those who work in the city. Detours that take you miles out of your way. Every road under the sun closed in the city. I thought that’s why they had the Pope-Mobile? I thought that was the entire point? And it’s not like we aren’t used to being stuck in extra traffic anyway every time the president wants to leave home and grab a bite to eat and we sit and wait for the motorcade to go by. It’s second nature. But I guess the Pope needs 100x the security the leader of the free world gets. I guess I don’t blame them, if the Pope dies on your hands it’s not a great look. Talk about an awkward Thanksgiving dinner when every auntie and uncle knows it’s your fault the Pope died. So if you’re one of those people who “goes outside” to “go to work in an office” with “other people”, might want to grab the work laptop and set up at the kitchen table next week.