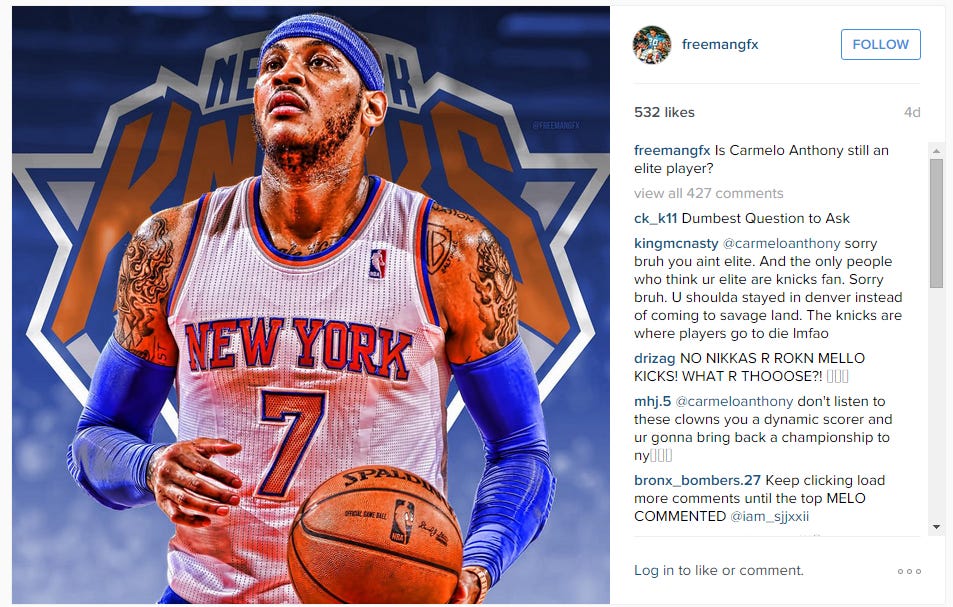 Finally Carmelo Anthony and Knicks fans can agree on something.  That was indeed the dumbest question ever asked.  Because in the NBA, you cannot be an elite player after failing to lead your team to the playoffs the last two seasons in one of the worst conferences ever.  And that goes without mentioning that he was the “elite player” on a Knicks team that just completed the worst season in franchise history.  So no, Melo, you are not elite.  You are not even close to being in the same conversation as LeBron, Westbrook, Curry, Durant, or Anthony Davis.  You have traded in your elite scoring figures for Instagram fingers and stories like this are all that’s left.  Melo isn’t even the most beloved player on his own team ever since The Big Weirdo’s plane full of Latvian goats and chickens (probably) landed at JFK.  Elite players do not get roasted by women’s tennis players or watch their teams start to rebuild as they enter the end of their prime years.

And what is with athletes talking shit on Instagram?  Grow up and start using Twitter.  If you want to creep at the Instahoes and whatnot like Kung Fu Panda, that’s cool.  But commenting on some fan art of yourself is almost as lame as the being guy blogging about it.  Just act like a superstar one time for me, Melo.  Then start playing like one again.  And do it for more than a few games at a time. And then mayyyybe we can start talking about whether or not you are elite (but you probably never will be again).

Also, just for the record, Eli Manning is and forever will be elite.