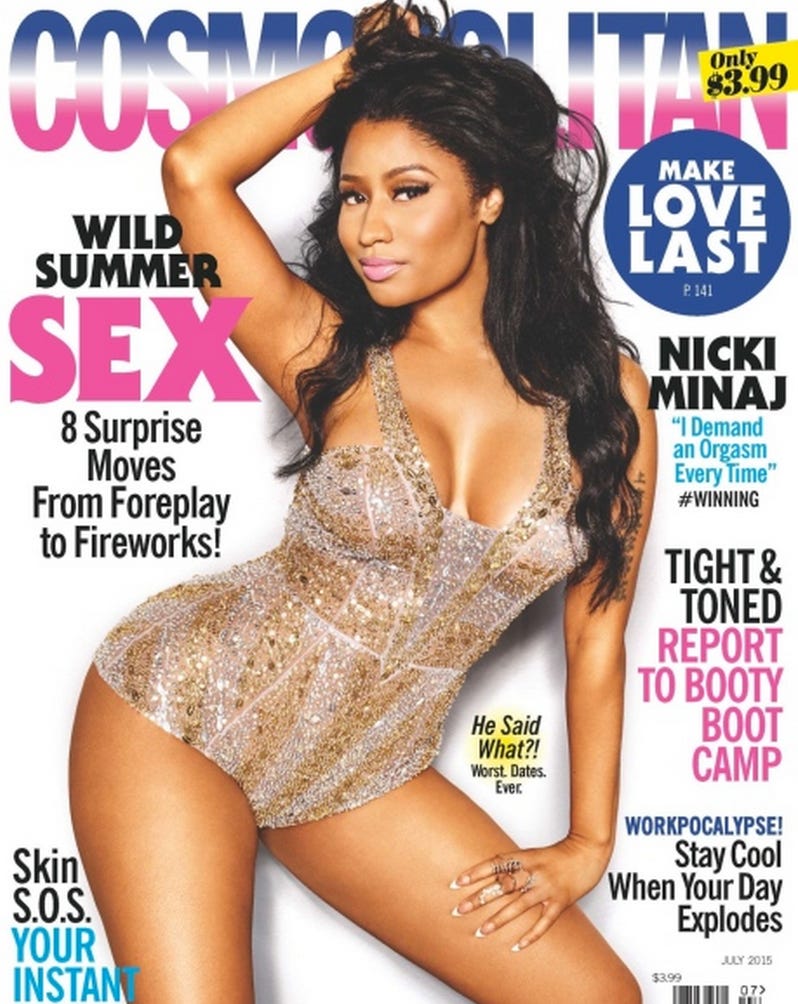 CBC – With cleavage-bearing front cover models and sexually explicit content,Cosmopolitan aims to get noticed. But some major U.S. retailers are covering up the women’s magazine following pressure from an advocacy group that claims the publication is “pornographic.” American chains Rite Aid Pharmacy, Food Lion grocery, and Walmart in the U.S. are all pledging to shield Cosmo’s racy headlines from shoppers. Walmart Canada, however, is keeping the magazine out in the open.  With a reach of more than 100 million readers worldwide, Cosmo is often given prime display space at checkout counters. It’s hard for shoppers to miss the magazine’s titillating teaser headlines such as “I demand an orgasm every time” and “Epic Summer Sex: 28 OMFG Moves!” But now the publication is getting some unwanted attention from the recently launched, “Cosmo Harms Minors” campaign. In a news release, campaigners contend that the magazine has morphed into a “verbally, and many times visually pornographic ‘how-to’ sex guide” that is now targeting young girls. The crusade is spearheaded by Victoria Hearst, a born-again Christian and the granddaughter of newspaper icon William Randolph Hearst, who founded Cosmo’s publishing company. Hearst and her co-campaigners with the American National Center on Sexual Exploitation (NCOSE) argue the magazine should be shielded from children and covered up in stores, just like Playboy. “We are asking that Cosmo be sold to adults only and have the cover wrapped like all other porn magazines in retail shops,” said NCOSE spokeswoman Haley Halverson.

As a smutty blog that unfairly gets banned in certain places as “Pornographic and Tasteless,” I have no choice but to stand with Cosmo here. Giving Cosmo magazine the same treatment as Penthouse with that shameful black bar is ridiculous. I’m pretty sure Penthouse will straight up show full frontal on their covers. The worse that Cosmo has is like a chick in a bikini. I mean is this NCOSE group aware of what year it is? Aware of the world we live in? Fucking teenage girls can watch online videos of girls their own age getting fucked on a leather couch for like a few hundred bucks with just the click of a button. Do we really think seeing the latest celebrity scantily clad is worthy of the black bar?

Although I gotta be honest I kinda agree with them as far as the headlines and story lines go. Thats usually some pretty graphic shit. Its gone from like “How to have a healthy sex life” to “Ways to make sure you have multiple orgasms every single time you have sex!” I’m waiting for the tips on the cover to be like “Stick your finger up his asshole! He’s insecure about it and won’t bring it up with you but you’ll milk him like a cow and he’ll like it!” So maybe they have a little bit of an argument there. A little subtlety never killed anyone, Cosmo.

Plus, like Chappelle said, all that “345 tips in bed” shit is nonsense. 4 ways to make your man happy and thats it: