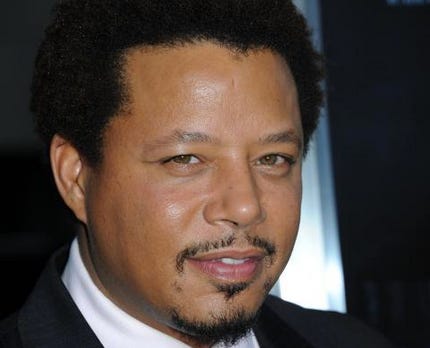 Ind - Terrence Howard has revealed his bizarre take on the world, and at the centre of it is the summation that one times one does not equal one, but two. In a wide-ranging interview with Rolling Stone magazine, the Empire actor revealed he has spent years working on his own logic which he has recorded in a language of symbols called Terryology, which will not be shared with the wider world until his work is patented. Howard believes his discovery will significantly change the way that mathematics is taught for generations to come, and that if Pythagoras were around to see this discovery “he would lose his mind”.  “This is the last century that our children will have to be taught that one times one is one,” he added.  But his success has not stopped the actor from claiming he spends up to 17 hours a day creating nameless plastic structures, which are made of cut up pieces of plastic and either stitched together with copper wire or soldered, that he believes prove his new form of mathematics. Howard studied chemical engineering at the Pratt Institute in Brooklyn until he fell out with one of his professors over the answer to the 1×1=1 conundrum. “How can it equal one? If one times one equals one that means that two is of no value because one times itself has no effect. One times one equals two because the square root of four is two, so what’s the square root of two? Should be one, but we’re told its two, and that cannot be.”

Sooooo I guess Terrence Howard is a bit of a lunatic. Did not see that coming. Not that I really give Terrence Howard any thought, but it’s always interesting to see who in Hollywood loses their mind. Tom Cruise went nuts, every child actress ever went nuts, and now Terrence Howard is spending 17 hours a day creating plastic structures to help him prove his Terryology. I’m just glad he’s all-in on it. He’s not like half-assed his insanity, he’s fully committed to it. He doesn’t just make something up and hope people believe it, he spends 17 hours a day proving it with plastic soldered together with copper wire.

And shouts to him for this whole 1×1=2 thing. While I’m prone to believe thousands of years of math aren’t wrong when it comes to 1×1, I’m not so sure any more. Who am I going to believe, mathematicians or Rhodey? If you think about it, didn’t they all believe the Earth was flat until Columbus came along (pretty sure that is another one of those BS lies they teach us in school, but let’s go with it).

And let’s not forget, Howard can’t afford to be wrong. The world already knows he has a tiny little penis. He also has 3 different accusations of hitting women. So would someone like that, with all that baggage, really just make up Terryology out of the blue? Didn’t think so. I believe in Terryology. 1x=2, bitches.