Wait so what’s going on here? Lot to unpack. Apparently Canesshades’ friend and fellow Youtube poster “AllabouttheU83″ (who was a little overweight) got bombarded with mean comments from Nebraska fans and passed away? So it’s Nebraska’s fault?

This is him by the way, Allabouttheu83. 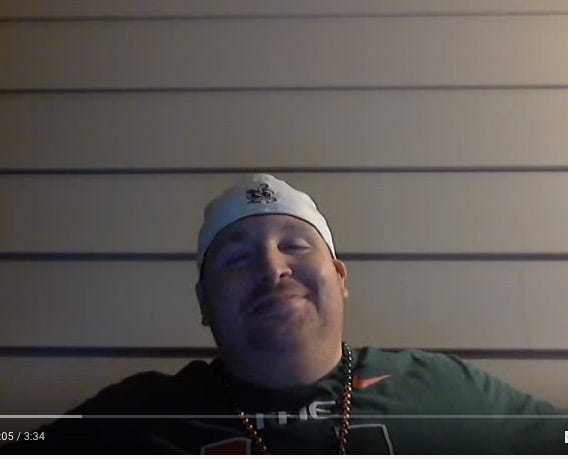 “Fucking everybody with some truth.” Damn, it’s true what they say, only the good die young. RIP.

But no worries, U Miami shit talkers. CanesShades is here to pick up the slack. He’s got his Canes Shades on ready to take it back to ’91. The internet trash talking torch has been passed to him and he’s sprinting full speed ahead with it. He will avenge his friend this weekend, by watching the Miami and Nebraska game on the 18 inch TV in his basement, and if Miami wins, making a VERY harshly worded YouTube video while shirtless. You can bet your ass on that.

Message boards and YouTube diss videos man…the lifeblood of college football fandom. Seriously you stumble on a good college football message board and you can get lost in that thing for days, just reading the meanest most vile insults about 18-22 year olds playing football for free. Pretty awesome stuff.

Sidenote, this part legit scared me

Like one of those handheld camera found-footage movies where it’s all shaky then the monster pops out of nowhere, except instead of a monster it’s a real life YouTuber and message board shit talker named Canesshades whose got his Canes Shades on.

PS – Where’s DannyBoyCane to weigh in when you need him?