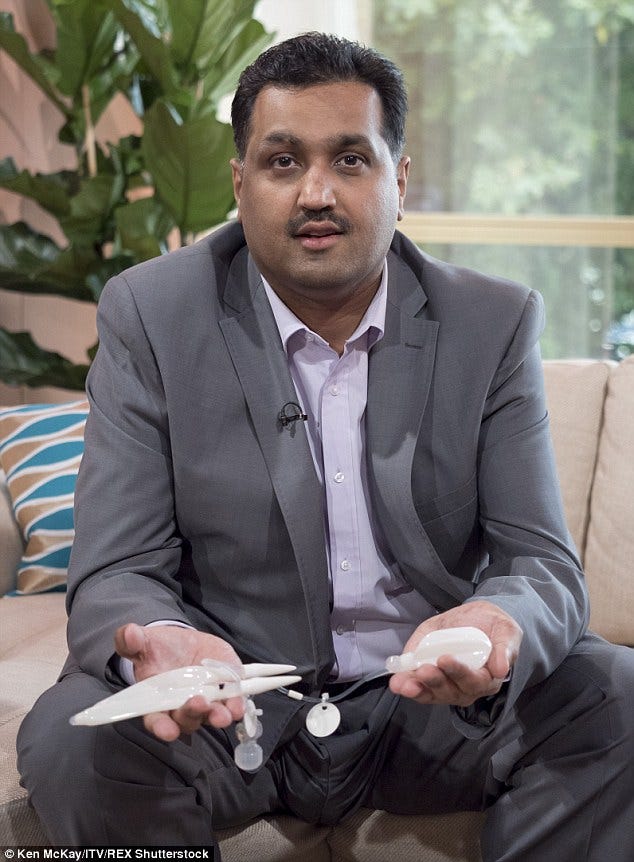 (DailyMail) – A man fitted with a ‘bionic penis’ – after losing his own in a freak road accident – has revealed he had an erection for two weeks following the surgery. Mohammed Abad lost his penis and testicle when he was run over by a car at age six. But last month surgeons finally fitted him with an eight-inch penis implant. The contraption – complete with ‘on’ and ‘off’ buttons in his testicles to pump it up or deflate it – was made from the flesh of his arm and fitted by surgeons at University College London. Today Mr Abad gave an honest interview to ITV’s This Morning programme about how his new manhood has changed his life, and how he now hopes to lose his virginity. The 43-year-old revealed he had an erection for a whole fortnight after the surgery. ‘I got out of hospital on the 10th of July and got a train back up to Scotland. I had to keep it erect for two weeks,’ he told presenters Phillip Schofield and Holly Willoughby. ‘I had to do that for it to heal, because that’s the way it works. ‘I managed to do something to not get noticed.’

Second of all, welcome to the world of a normal man. Not that fun, is it? You’ve been living life completely unaware to the perils of public boners. Had no idea that, that shit happens. Hope you enjoyed your dose of reality, trying to go about your day with that fragile hardware bopping around off your legs then turning into an uncomfortable and embarrassing stick if you accidentally touch it the wrong way. But how about you relax with the, “I managed to do something to not get noticed” nonsense. You’ve had a dick for a month and now you’re claiming you invented the uptuck? Back of the line, bubba. That shit’s been around for ages. The uptuck, the pocket hold, the sweatshirt around the waist, the “go to the bathroom and jerkoff,” the “pinch your arm until you’re in so much pain you forget you’re horny,” we’ve thought of it all. You get credit for none of it.