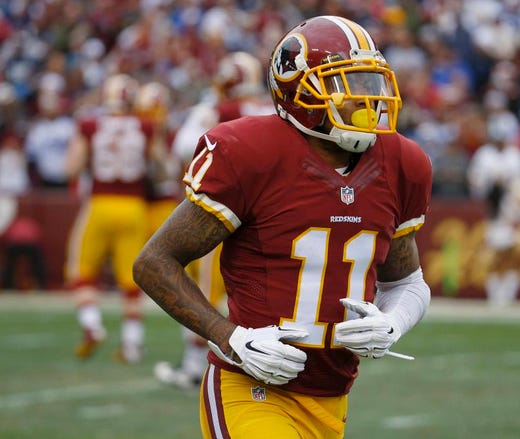 PFT - DeSean Jackson was injured on the first play of the Redskins’ second offensive series Sunday, and it appears will be October before Jackson can return to action. Per ESPN’s Adam Schefter, Jackson suffered a strained hamstring that will keep him out of the lineup for 3-4 weeks. He was injured while running a deep route down the sideline, trying to make the kind of play that’s made him one of the NFL’s best deep threats. Jackson led the NFL with 13 catches of 40 yards or more last season.

Well, that’s no bueno. I’m Natey Silver Linings when it comes to the Skins this year. It’s a low bar, no expectations, just hoping to see my football team compete and not make asses of themselves. Yesterday was a solid start. But losing DeSean hurts, it hurts a lot. He’s the most dynamic player on offense. It revolves around him. You stretch the field with DeSean to open up the run game. You take away a safety to get Jordan Reed wide open. Allows Garcon to be the best possession WR he can be. DeSean is a game changer every play he’s out there whether he’s catching the ball or not. So losing him for a month really hurts. It hurts Kirk, it hurts Alf, it hurts Reed, it hurts the Oline. One domino falls and the rest start falling too. What this means is Ryan Grant should get a chance to prove himself. I already want Grant in the game instead of Andre Roberts, and this might be his chance. Maybe we’ll get to see preseason darling Rashad Ross? He was inactive yesterday but I’d love to see what he can do in a regular season game. The silver lining here is we already know we are rebuilding, so losing DeSean for a month just lets us see what we have in Jamison Crowder, Ryan Grant, and possibly Ross.