In case you were wondering, yes, Kelly Slater is still around and he is still very good at doing surf things. I can watch this gif loop 100 times and I’ll still never be able to understand how he was able to stay on his board here. How a bald dude became one of the greatest surfers in history will always be beyond me as well.

Also, the real reason why I blogged this trick is because it’s time that somebody gives Kelly Slater’s Pro Surfer the respect it deserves. It’s not on Tony Hawk’s Pro Skater 2 level but I’d definitely throw it higher in the power rankings than THPS4 and anything after Underground 2. Play Kelly Slater’s Pro Surfer for a couple hours, watch The Endless Summer one time through and you just became the biggest surfer bro on the block. But now let’s make our way over from one legend with terrible hair to another legend with A++ surfer hair. 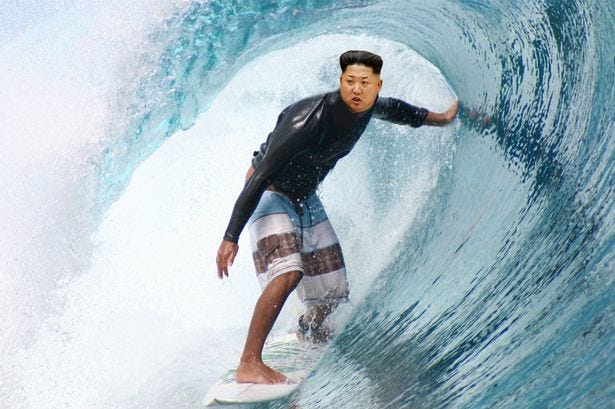 Love this move from Kimbo. North Korea is always behind on everything and they’re still working with dial-up. So chances are, The Endless Summer and/or Kelly Slater’s Pro Surfer just made their way to North Korea for the first time and now Kimmy J is hella into surfing at the moment. Probably watched the movie 10 times in a row and now all he wants to do is get out there, shred some gnar and get so pitted. Everybody loves surfer dudes. They’re cool, they’re chill, they usually have awesome hair, they live the life. And that’s what Kim Jong wants right now. He doesn’t want to be known as that dickhead who is always threatening nuclear warfare and throwing out propaganda bullshit after propaganda bullshit. All Kimmy needs is some tasty waves, a cool buzz, and he’s fine.