WaPo - At least one Maryland farm thinks Taylor Swift’s marketability can extend to corn mazes. Summers Farm in Frederick, Md., has modeled its 12-acre corn maze in the shape of the pop star singing into a microphone. The words “Dare To Be Different” are carved above Swift’s face, and the farm created a dramatic video showing an aerial view of the maze set to Swift giving an inspirational speech that went viral from her “1989” tour, MTV noted. “Taylor Swift emanates a fun and positive image for today’s young people,” Teresa Greenwood, one of the farm’s owners, said in a statement. “Swift’s generosity toward charitable causes is one thing, but perhaps more importantly, she dares to be different, embracing the power to be all that she can be … and encouraging her fans to do so as well.” There will be “Taylor-made” clues throughout the maze to help people navigate the cornstalks. According to Summer Farm, the maze is divided into phases and is suitable for all ages. There is a smaller maze for young children and a “super challenging larger maze” for older participants. In the past, the farm has carved its maze into a tribute to Washington’s football team. Admittance to the farm and the corn maze is $11.95 on weekends and $7.95 during the week. 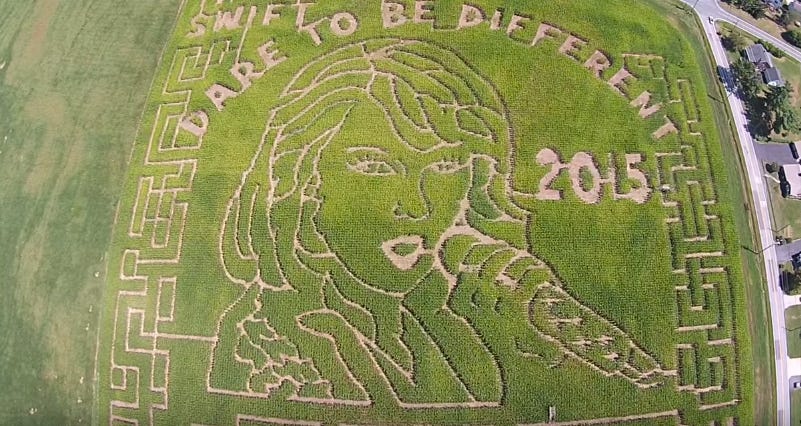 As the old saying goes, you haven’t quite made it until your face becomes a corn maze in Frederick. So now Taylor Swift has officially made it, someone should let her know. She replaced the Redskins as the corn maze at the farm, which is probably the best business decision of 2015. 7 wins over the last 2 seasons, or the biggest superstar on the planet? Every single child within a 50 mile radius will be begging their parents to take them. And then while you’re there you have to do the pumpkin patch, the hay ride, the entire package. What I realize is I need a corn farm ASAP. What the fuck is Trent doing blogging all day? He should be cutting some famous Iowan’s face into his backyard as we speak. (I just assume there’s all sorts of famous cult heroes in Iowa that Trent thinks are really famous but the rest of us have zero idea who they are.)

Now part 2 of this blog, the movie The Maze Runner. I watched on Saturday because I was dying of the plague over the weekend. The Maze Runner is a great movie for people who LOVE plot holes every 3 minutes. It’s not even a bad movie- the acting was good, it’s a good concept, but holy shit the plot holes. Spoilers ahead:

The fact they are just so positive “nobody has survived a night in the maze”. They have no idea if someone got out. They’ve never seen any of those maze creature griever things. What if they were easily killable and they just had no idea?

So after 3 years they should know they’re being watched. Why not do a hunger strike or something like that? Take a stand. Do something. And on the same thought, they were all just kind of…dumb. They would have all died. But at the same time that guy built a to-scale model of the maze but they still couldn’t get out? I mean what?

How were they even expected to get out without weapons. Those griever things were massive killing machines. It just doesn’t really make sense.

These people have gone years without seeing a girl…uhhhh…yea. I don’t think they would have been too kind to her. Orrrr to each other before she arrived, if we’re being honest.

I mean there’s so many more. The password thing, how they don’t mark the floor in the maze, how the weather is beautiful despite apparently the sun exploded or whatever, more that I can’t remember right now.