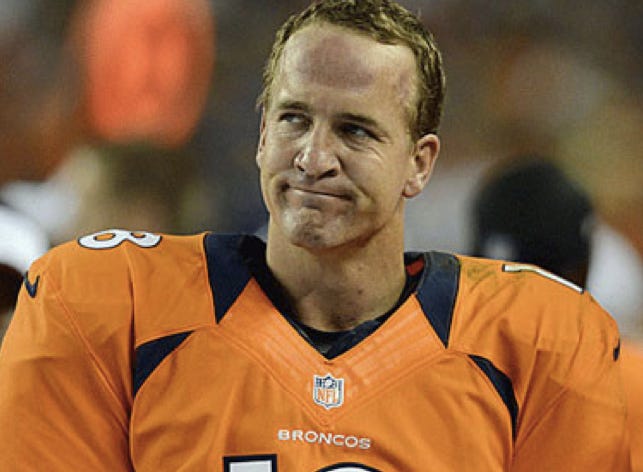 I know as a fan of Tom Brady, this is probably a pretty dangerous blog to write, but Peyton Manning is dead. Yes, people said the same of TB12 but at no point last year did he look anywhere near as bad as Manning did yesterday. Plus, Manning looked this bad at the end of last year and while I thought maybe he had some nagging injuries that the offseason would heal, that doesn’t appear to be the case. Plus, Rob Gronkowki ain’t walking through that door in Denver.

And I’m sad about it.

I haven’t hated Peyton in a long time. I’ll never stop enjoying beating him, but that true disdain left a long time ago. Way back in the early days I despised him, then I came to appreciate how good he was and enjoy watching the Pats play against him, and now it’s just a respect. He’s like a football version of Derek Jeter.

That’s why yesterday was tough to watch. Peyton is like MJ on the Wizards when he couldn’t dunk. He’s like your grandfather moping around at his 90th family Christmas, just waiting to die. He can’t do any of the things he used to do anymore and it’s just sad. That’s not the guy I liked watching play football. He’s got a fused spine, can’t feel his fingers and can’t throw a football. Everything is a wobbling duck that either bounces nowhere near the intended receiver or sails off into the distance. It’s depressing as shit. I remember when I was young my mom didn’t let me see my grandfather in the hospital because she didn’t want me to remember him that way and I just wish someone would do the same with Peyton. Remember the good times, hide your eyes from the sadness that’s left.