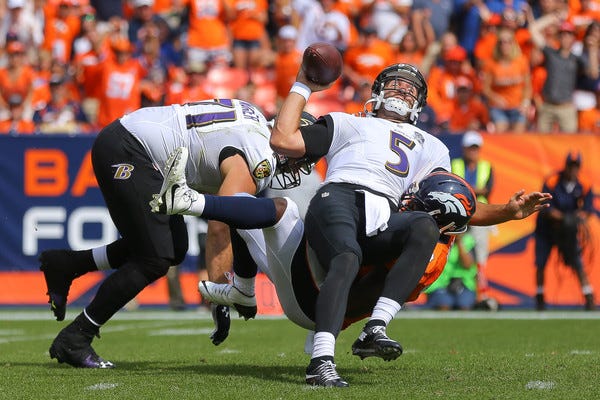 That title right there is the last thing I wanted to write on Monday morning in week 1, but that’s where the Ravens are. Suggs is out for the year, the offense stunk, and pets’ heads are falling off in Baltimore. What’s fascinating though, is that the Ravens still only came about 15 yards short of winning that football game. The SAME EXACT THING happened last year in Week 1, and that was a loss at home against a division rival. So all things considered, things could be worse. Still turned things around and had ourselves a decent season. Some other notes:

– If you’re looking for a glass half full approach, your mantra today is that this Ravens defense is really really good, with or without Suggs. Only giving up 219 yards in a game where you’re on the field for 37 minutes is impressive, no matter how much of a noodle arm the opposing QB has. They got pressure, they stuffed the run, they scored a touchdown… bravo to Dean Pees and the defense yesterday. There aren’t too many offenses on the schedule better than that one, so that’s a great sign moving forward.

– Timmy Jernigan will be back soon, don’t forget that. Doesn’t replace Suggs, but cushions the blow for sure.

– Another thing about Suggs. I think this was the year his play really dropped off anyway. He was a ghost all day yesterday going against an inexperienced left tackle. I think his loss is being overstated in Baltimore today.

– Jimmy Smith obviously made the play of the day, and he was really good all day too. Will Hill deserves a lot of credit too. You didn’t see him make too many plays, but he was tight in coverage deep all game. There’s a reason the Broncos didn’t throw the ball downfield much, and it wasn’t just because of Peyton’s arm. It’s because the coverage downfield between him and Kendrick Lewis was excellent.

– I don’t think we’re talking about a loss if Daryl Smith just catches that damn interception. It’s probably a touchdown if he grabs it. With the way that defense was playing at that point in the ballgame, there’s 0% chance the Broncos come back from a 20-9 deficit. And I don’t think Joe Flacco is trying to force a 3rd and 7 throw on the next drive with that lead either. That Talib pick 6 will be the highlight of that game, but it never happens if Daryl Smith just squeezes the damn football. Again, a loss is a loss, but in terms of indications of where the Ravens stand as a football team moving forward, remember plays like these. Next time we’ll get ours.

Okay, time to dish out some hate on the offense….

– Be mad at Flacco. Be mad at Steve Smith. Be mad at the rest of the receivers who flat out stunk. They deserve it. But your #1 scapegoat is the offensive line without a doubt. I’ve seen that movie before and it was titled “Turnstiles: The Story of the 2013 Ravens”. That year Flacco took a relentless beating and it resulted in the worst season of his career by a mile. Yesterday he could hardly get a 5 or 7-step drop before having one of his own lineman pushed into him. I think I underestimated Denver’s pass-rush, but this is just ridiculous:

– Eugene Monroe getting concussed early played into that, but I think he was already the weak link of the OL. James Hurst got some experience last year at LT and hasn’t been terribly impressive. He’s a liability right now, but I’m just really shocked the rest of those guys played that poorly. Even the run game couldn’t get going until midway through the 2nd half. If Monroe is out for a while, Harbaugh may be forced to shift Osemele to left tackle and plug John Urschel in at left guard. The Osemele at LT experiment failed in 2013, but mainly because Gino Gradkowski and Mike Oher were extraordinarily bad at football. It’ll be interesting to see how it pans out if they have to make such a shift again.

– It’s really hard to apologize for Joe Flacco today. He is what he is. A great quarterback when he’s able to get comfy and step into his throws, and a terrible QB when he’s on his heels. That basically goes for any QB, but it’s especially true about Joe. There’s a strong correlation between his pass protection and his performance. He’s not Tony Romo or Big Ben where he’s going to slip tackles and pull plays out of his ass. We saw it in 2013, we saw it against the Jets a couple years ago when Rex brought the house all night on MNF, and we saw it last year when Hurst had to deal with JJ Watt… he stinks with people in his kitchen. We’re going to keep seeing the bad Joe Flacco if this OL continues to play like that.

– Big gripe about the refereeing on one play. Why wasn’t that a horse-collar on that sack of Flacco? Like, I fully understand that there’s a rule about no horse-collar flags inside the pocket. I understand that there was some ambiguity as to whether he was in the pocket or not. But why does it seem like referees always err on the side of caution with every QB but Flacco? He didn’t get that call when the Lions tried to obliterate his knee a couple years ago. He got driven into the ground borderline late on the first drive of the game yesterday. It’s just ridiculous how refs seem to pick and choose who they’re protecting and who they’re not. I hate the coddling of QB’s in this league, but I just want some damn consistency out there. Refs have such a tendency these days to throw the flag if a hit just looks nasty, and there’s no doubt that that was a gruesome looking tackle. Dude almost broke his spine in half. If you yank down a Manning or a Brady like that, you’ve got 3 flags coming in before those guys even hit the ground. Plus I don’t even get why there is rule about there not being horsecollar calls in the pocket. If it’s a dangerous tackle, it’s a dangerous tackle no matter where it occurs. Come on NFL, use your brain. Either protect ALL QB’s or don’t.

– Steve Smith has to catch that ball. You can make excuses that it was slightly tipped or whatever, but he should be coming back to that ball stronger than that. And he knows it. He got bullied on that pick 6 too. Safe to say Talib got his revenge yesterday.

– The rest of the WR’s were nonexistent. It was incredible really. Aiken had one catch for -1. Brown had the one first down catch on that 20 yard out and another short grab. Campo had a couple grabs towards the end there. So that’s 6 catches from your 4 WR’s. That’s brutal. I saw a lot of people clamoring for Breshad Perriman to finally be healthy. “OOOO WE NEED HIM TO STRETCH THE FIELD”. Yeah cool, that’s a really neat idea. I’m just so down on the OL right now that I can’t picture Flacco even getting the opportunity to throw him a deep ball. Fixing the offense begins and ends with the OL.

– Hey did I mention the OL needs to get their shit together?

– Just a closing thought regarding that football game as a whole. Apparently that was the least combined yards by two NFL teams since the Ravens game against the Jags on MNF in 2011. THAT is the exact game I think of when things aren’t going great for the Ravens and I tell myself “Hey. It could be worse. It could be that Jags game a few years back.” So yeah that’s how much that football game stunk and I hope I never have to think about either of those two games ever again.

All in all, the beat goes on. It’s just one loss. We were bound to lose a few and that was one of the more likely ones. The Ravens are hanging in San Jose all week to prepare for their game in Oakland next Sunday. That right there is a football game they can ill afford to drop. They certainly have a lot to work on, and I fully believe they will turn it around. Really nowhere to go but up for the O. And if you have to think about yesterday’s game at all, try to think about the defense. It’s for your own health.