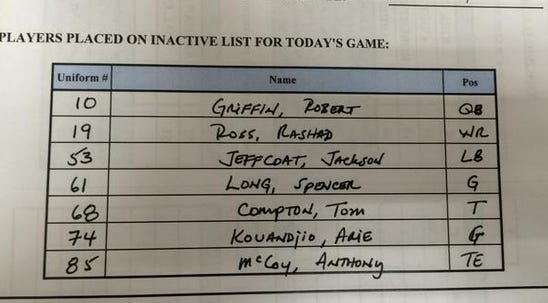 NFL.com - That decision makes sense for plenty of reasons, especially since Robert Griffin III was not cleared to participate in contact drills until Friday after suffering a concussion three weeks ago. But so many other questions remain unanswered beyond today’s depth chart. Most notably: Why are the Redskins keeping Griffin on the roster? That question became especially difficult to answer this week based on occurrences during practices when Griffin, according to multiple team sources, was running with the scout team defense as a safety. Yes … a safety. It is also intriguing since the team has recently reconsidered the original notion that they would list Griffin as the backup once fully healthy for the entire week leading up to Week 2, a team source said. More likely now, Griffin will be the third-string quarterback. But for a player who was selected second overall in 2012 – and declared the starting quarterback by the head coach as recently as a few months ago – this is no doubt a peculiar decision. It is peculiar, however, for more than superficial and ego-driven reasons. If Griffin had suffered an injury while playing safety, the team would be forced to pay him his $16.2 million salary for 2016. Even if Griffin is willing to handle such responsibilities, it begs the question why the Redskins would take such a gamble.

What in the worldddddddd? This smells strongly like Dan Snyder. Meaning Jay Gruden doesn’t want RG3 playing quarterback, so he’s relegated him to scout team safety in hopes to…embarrass him? Stick it to Dan Snyder who still won’t pull the trigger on releasing him? Who knows. What I do know is if he gets hurt playing scout team safety then they are on the hook for 16.2 million dollars next year. Just seems like now it’s a dick waving battle between Jay Gruden and Daniel Snyder. Gruden was forced to name RG3 his starting QB prior to the season, Snyder signed Griffin to the extension despite the fact the head coach hates him, and now that 16 million dollar quarterback is inactive and a scout team safety. Oh how the circus rolls on.

PS: Colt is one snap away from playing! GO COLT GO!

PS: Don’t forget who is on the tix for today!