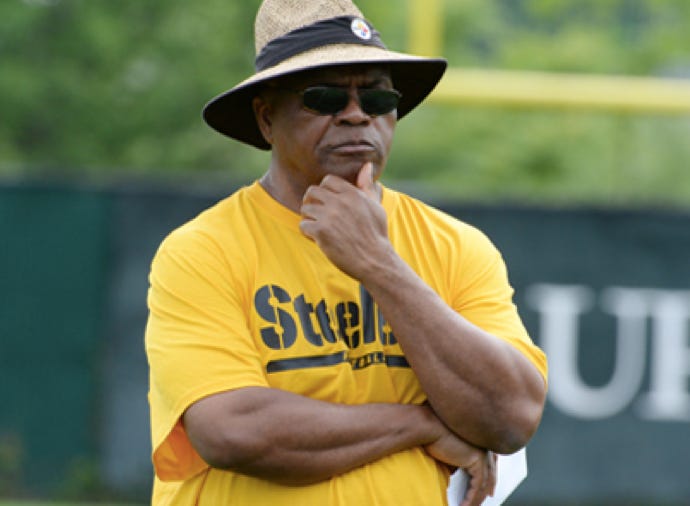 (ESPN) — NFL security is investigating Pittsburgh Steelers tight ends coach James Daniel for allegedly assaulting and verbally accosting a New England Patriots fan on the way to the locker room before halftime, according to league sources. A league official confirmed the NFL is aware of the incident and is looking into it. A Steelers spokesman said NFL security has informed them about the incident and the team is also investigating. The incident in question occurred before and after halftime. Daniel, who was on his way to the Steelers’ locker room, was seen allegedly kicking a Patriots fan in the back of his leg and yelling at the fan in front of witnesses. By the time Daniel returned to the coaching booth after halftime, police and NFL security were waiting for him. Once the coach was identified by witnesses, and police approached him about controlling his behavior, Daniel began shouting at the police officer, according to witnesses. NFL security, which did not witness the exchange with police, afterward interviewed Daniel about the entire incident, according to sources.

The Patriots just won’t stop cheating and I love it. Deflategate, Headsetgate, Goallineshiftgate and now they’re sending out decoy fans to trick coaches into beating them up. It’s genius. You come into Belichick’s lair and you better watch out for all the booby traps. Nothings going to go your way, you’re not going to catch any breaks and your coaches are going to get themselves in trouble with Johnny Law. It’s crazy that they can even trick an organization as classy as the Steelers into assaulting a fan and throwing off their game by having the police in the coaching booth during the second half. Hard to gameplan and focus when your tight ends coach is getting read his miranda rights. Classic Belichick, he strikes again.