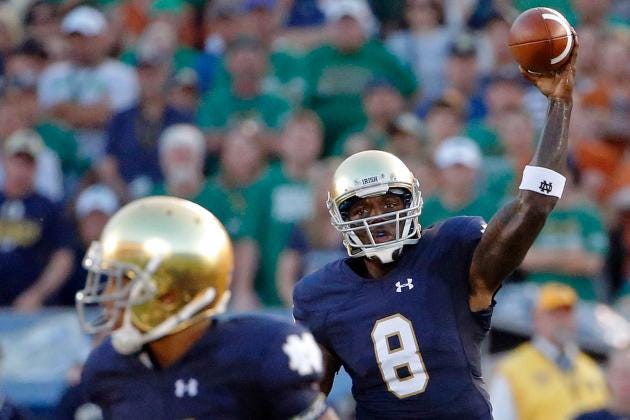 Remember how you felt last Saturday during the Notre Dame-Texas game? Full of confidence, Irish eyes smiling with visions of a playoff berth? Well Virginia felt the opposite. They, like Notre Dame, had a coach in his 6th season, a good amount returning starters, and an air of optimism about the program. Mid way through the 3rd quarter, Mike London was officially on the hot seat since UCLA lit up Virginia 34-16 in the Rose Bowl. Now the Hoos have the Irish coming into Charlottesville and are staring 0-2 in the face.

I’ve skimmed through a few other previews of the ND-UVA game. Everyone keeps talking about how UVA’s defense is good, that its the strength of their team, and that it could be Virginia in the game. Umm…what? Did anyone watch the UCLA game? Josh Rosen absolutely picked apart the Cavaliers. You don’t have to be Bear Bryant to realize that UVA doesn’t have the athletes to keep up with ND. Last week they tried to throw creative blitzes at Rosen. They never got home and Rosen threw for 350 yards. Rosen got the ball out quickly, Zaire showed he can do the same thing last week. And if things break down, Zaire has the wheels to escape trouble. I also think ND is tougher in the run game and just as explosive passing the ball. I think Virginia native CJ Prosise has another big game and the Irish move the ball at will.

UVA has a nice little running back with a sweet name. Taquan “Smoke” Mizzell. 5’11 195lbs. Not exactly a bruiser, but he will get the vast majority of the reps. The QB at UVA…he flat stinks. Noodle arm, kind of a weird delivery. Can’t get the ball down field, and even if he could he doesn’t have a lot to throw to. Somehow Matt Johns was better than Grayson Lambert who ended up transferring to Georgia. Now they’re left with a passing game that is really just check downs. Put Jaylon Smith on Smoke Mizzell and then wait for UVA to make mistakes. I highly doubt that Virginia will be able to consistently move the ball against the Irish defense.

One Area Of Concern

Playing in Charlottesville. What? Chief, that place is a god damn morgue. EXACTLY. UVA is one of those places like Northwestern where it just lulls teams to sleep and by the time you wake up its the 4th quarter and you’re in a game. Virginia beat Louisville and almost beat UCLA last year because those teams got caught napping. If the Irish are ready to go from the start they should be able to sleep all they want in the 2nd half.

Notre Dame 37 Virginia 13. Credit to Virginia for playing the toughest opening two weeks of anyone in the country, but they’re about to get housed again. Blue and gold nightmare for the second week in a row.

Honestly, I’m already bored of this game. Kinda falling into the mental trap I described in the last point. I’m mentally skipping UVA and UMass. Weeks 2 and 3 should be Michigan and Michigan State. One cream puff and one real challenge.

Interesting quote from Brian Kelly on the revival of the ND-Michigan series: “I think it’s trending up. It’s something that we need to get obviously in line to get that going. I think that’s something that everybody wants to get going and get Michigan back on the schedule. I think that sentiment is coming back to the forefront of where college football needs to be. Some of those classic rivalries coming back together. I know we’re going to be working hard to see if we can get that done.”

Picks for the week

PS: I told everyone that I was doing the hockey podcast and I am, but I think I might do 3-4 eps of Notre Dame. Already have a good guest host lined up. First episode of that should be the USC week.